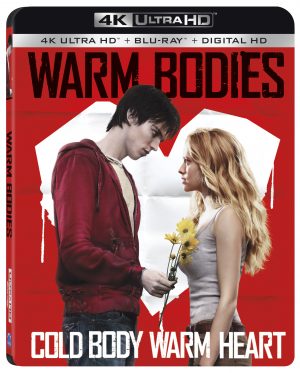 The unique romantic comedy with a paranormal twist, Warm Bodies, arrives on 4K Ultra HD Combo Pack (plus Blu-ray™ and Digital HD) for the first time ever on October 3 from Lionsgate. In this story about the power of human connection, Nicholas Hoult stars as an unusual zombie who forms a special relationship with a human girl as they struggle to survive during a zombie epidemic. Rounding out the all-star cast is Teresa Palmer, Emmy® winner Rob Corddry (Actor in a Short Form Comedy or Drama, “Childrens Hospital,” 2008) and two-time Academy Award® nominee John Malkovich (Best Supporting Actor, 1993, In the Line of Fire, and 1984, Places in the Heart). 4K Ultra HD provides over four times the resolution of Full HD and includes Dolby Vision™ high-dynamic range (HDR) to deliver the brightest, most vivid and realistic color with the greatest contrast. Written for the screen and directed by Jonathan Levine (The Night Before, 50/50) and based on the best-selling novel by Isaac Marion, the Warm Bodies 4K Ultra HD Combo Pack will be available for the suggested retail price of $22.99.

A funny new twist on a classic love story, Warm Bodies is a poignant tale about the power of human connection. After a zombie epidemic, R (a highly unusual zombie) encounters Julie (a human survivor), and rescues her from a zombie attack. Julie sees that R is different from the other zombies, and as the two form a special relationship in their struggle for survival, R becomes increasingly more human – setting off an exciting, romantic, and often comical chain of events that begins to transform the other zombies and maybe even the whole lifeless world.