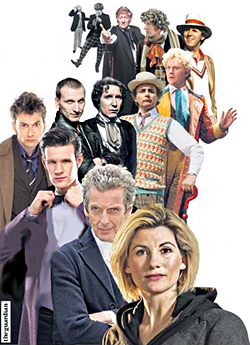 This week fandom was set on its ear by the announcement of the newest person to play the Doctor on BBC’s venerable sci/fi TV show, Doctor Who. (If you don’t already know, the Doctor is a time-traveling alien with the ability to regenerate himself into an entirely new body and persona when his current body is on the point of dying.) There have been 12 such regenerations so far; Jodie Whittaker will be the 13th and the first woman to play the part. Joanna Lumley was a female Doctor for a sketch some years back – written by Steven Moffet, no less – but that is not considered canon.

Predictably, there has been some negative fan reaction, although the bulk that I have seen has been overwhelmingly positive. This kind of change often provokes this kind of reaction. When it was announced that the captain on the next Star Trek series coming out (Star Trek: Discovery) was going to be a woman, there was similar booing and hooing.

I can sort of understand. Fans can be conservative; they want what they like to be the same but different only not too different. There have been times when, as a fan, I was somewhat resistant to change. A prime complaint has been that young boys are losing a role model and there aren’t that many heroes who depend on their wits and smarts rather than their fists. Even one of the actors who played an earlier Doctor, Peter Davison, has voiced this objection. However, my feeling is that these young boys have 12 other incarnations to use as a role model. Young girls have been expected to use the male Doctor as a role model; giving them one who looks like them after fifty years of the show being broadcast doesn’t seem to me to be unreasonable.

My late wife, Kim Yale, was a huge Doctor Who fan (as am I) and she used to dress as Tom Baker’s Doctor to cosplay at conventions before cosplay was a big thing. She would have been over the moon about this. My partner, Mary Mitchell, certainly is and has pointed out that having the 13th Doctor be a female is very appropriate since 13 is a “female number” as there are 13 moon cycles in a year.

To me, what ultimately matters is what character do they create and how good are the stories that they tell. When you’ve worked for a long time on a given project, as a writer you look for ways to shake things up and make them fresh. On my book GrimJack, I once killed off the main character and then brought him back and later on, replaced him with an entirely different incarnation (yes, I was a big Doctor Who fan at the time and, yes, that influenced the change a lot). I intended to keep doing that from time to time. And one of the later incarnations I had planned was a female GrimJack. That probably would have incited some comment as well. We just never got to it.

So I’m very pleased with the selection of the new Doctor and hopefully the stories that will come of it. I hope the new showrunner will explore the change and what it means.

One last interesting note: I read that Ms. Whittaker will be paid the same salary as the actor who preceded her, Peter Capaldi. No wage disparity in the time vortex.