REVIEW: Ghost in the Shell 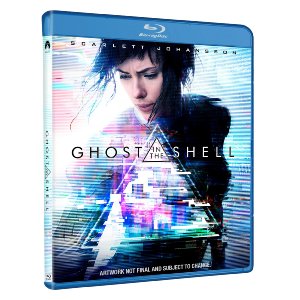 While fully aware of Japan’s Ghost in the Shell and its impact as a Manga and Anime, I never experienced any version of it. As a result, I watched the recent live-action film version without preconceived notions. I knew all about the casting controversy but until there’s an actress of Japanese descent who can open a movie wide, casting decisions, such as this, will continue. So get over it.

Masamune Shirow created an interesting meditation on where humanity is going as he, like Ray Kurzweil, foresees the day when man and machine blend into a singular being. It won’t be overnight, nor will it be neat and easy. As a result, the question of what does it mean to be human permeates the film as written by Jamie Moss, William Wheeler, and Ehren Kruger and directed by Rupert Sanders.

The story centers on Major (Scarlett Johansson), an accident victim who awakes to find her brain has been wired to an android body. She now serves Section 9, a counter-terrorism operation, currently tasked with hunting down the killer known only as Kuze (Michael Carmen Pitt). Along the way, she is seeing images making her question not only her humanity but her memories. While searching for the killer, she searches for her own identity.

This is a brilliantly designed and realized world so I wish we were more fully immersed in it rather than seeing it as colorful window dressing. The Section 9 agents operate in and around an urban society but we have no real feel for how this world works nor how the general populace feels about these cyborgs and androids living among them. What is real and what is acceptable? We’re given merely hints.

Instead, sadly, we have running, jumping, fighting, and way too much shooting. Additionally, Sanders has everyone underplay their parts, muting the emotions and robbing the characters of range. The movie is drab and dull, perfunctory, wasting the grand themes raised and world built in favor of the same old. 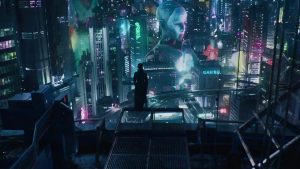 Johansson has certainly proved herself capable of both acting and action thanks to her Marvel work and Lucy so she shines here. While everyone else is robbed of color, she shimmers as she comes to realize she was the first successful ghost placed in a machine, but far from the first. Her confrontations with her designer, Dr. Ouelet should have crackled but are instead downplayed. Juliette Binoche, in a change of role, brings warmth and humanity to the character but doesn’t get to do enough with it.

Similarly, the Section 9 team is made up of an interesting variety of international actors but other than Pilou Asbæk as her partner Batou, none of them are seen enough for the audience to care.

By the time the Major gets answers, Kuze’s predictable rationale is revealed, and things are settled, we’re long passed caring, preferring a nap or the source material.

Ghost in the Shell comes in a variety of formats including the standard Combo Pack of Blu-ray, DVD, and Digital HD code. The film’s high definition transfer to Blu-ray is stunning, capturing the colors and shadows perfectly for home viewing. The Dolby Atmos soundtrack is a solid match for the visuals.

There are just three interesting Special Features: Hard-Wired Humanity: Making Ghost in the Shell, a multi-part Making Of feature that properly credits the set designers and WETA’s visual effects team for bringing the original to life. We look at the under-utilized Section 9: Cyber Defenders and then you finish with the Man & Machine: The Ghost Philosophy that talks a more interesting game than the film manages to deliver.