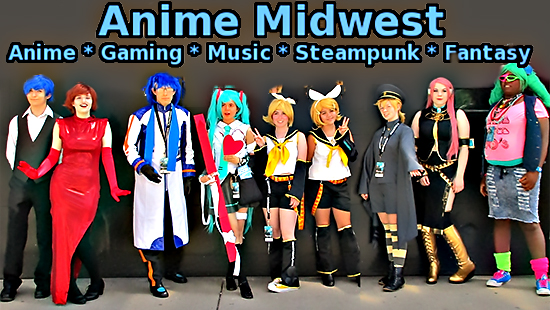 This weekend finds the Unshaven lads amidst the fine folks adjacent to our hometown at the Anime Midwest convention at Rosemont’s always-lovely Donald E. Stephens Center. The show itself marks our fourth time attending. I’d be lying if I said this particular anime show was our top choice; Anime Central for all intents and purposes is a bit larger fish by comparison to this mid-summer affair. Getting a table at A-Cen however, is like getting a job with the city of Chicago. As my Uncle Howard once lamented: “You have to know someone, owe them a favor, and then hold on to it for dear life.”

Uncle Howard’s version of that quote was far dirtier than presented. But I digress.

This show itself is fine and dandy – boasting an always energetic crowd who attend with money in their pockets and a song (that we can’t identify) in their hearts. That it’s our fourth year attending should no doubt quell any lingering fear of us being tepid on purchasing a table. And with no small press areas to be dubiously placed you won’t hear me complain about any sundry logistic issues.

No, instead you’ll hear me complain about an issue brought to our attention that has me in a dilly of a pickle.

Anime Midwest, along with a collection of several other mid-sized similarly themed conventions are helmed by one Ryan Kopf. I would like for you to go ahead and google “Anime Midwest Ryan Kopf.” Go ahead. I’ll wait.

See where things get prickly?

For those too lazy to google, I want to tread lightly here. Suffice it to say, Mr. Kopf sets off more than a few alarm bells when placed into the ole’ search engine. He is connected to a large trail of word salad the includes creep, stalker, and several more I choose not to repeat here. Neither I nor anyone in Unshaven Comics knows Mr. Kopf personally. None of us, to our knowledge, have even met him. The folks we’ve worked with in conjunction with the con have always been genial and easy to work with. As attendees, they have given us access to a con suite with free ramen noodles, and their volunteer staff has always been helpful and friendly. But beyond those niceties comes now this blow to our decision to attend the show.

The sheer amount of anecdotal evidence that places Kopf in a litany of angry and spiteful feelings are enough to make Unshaven Comics think twice about attending this show – be it this year or any other in the future. Sadly, the table is paid for, the books ordered, and merch ready to go; to not attend is to derail necessary cash flow into our always-by-the-bootstraps-budget of our li’l studio. We have to be here, and you better believe we’ll sell the hell out of our wares until the show floor closes tomorrow afternoon.

But beyond that? We’ll be ghosts in the wind. Next year, when it comes to Chicago-based Anime Conventions, it’s A-Cen or bust.

The conundrum to this all… what irks me most… is the Devil’s Advocate that sits on my shoulder. Kopf is merely a piece to a puzzle that works without him. And should all that surrounds him be as accurate as my gut tells me it is (suffice it to say whilst doing research this week, several folks I know who know the man are quite clear in their agreement with much that Google identifies), well, can’t Unshaven Comics enjoy a good show in spite of him?

Certainly, the attending public either don’t know or don’t care. Converging with one another to enjoy a convention is one of the truest joys in comic bookery. Take Dragon Con; despite plenty of now-documented-and-accurate police action taken on the former leader of that Con, Atlanta’s crown jewel of geek fun continues to be a dominant gem for conventioneers abroad. One man, no matter the level of entrenchment he has at an event, necessarily sullies the entire show. The show goes on. Attendees come, revel, make memories, and leave without a single worry of who necessarily takes home the bag of cash at the registration desk.

It is my hope that Anime Midwest may seek to oust their would-be show-runner in much the same fashion as the aforementioned Dragon Con. There’s a gaggle of good people connected to this show Unshaven Comics absolutely wants to see happy and throwing one heck of a show every year. Conventions are hard business. It would be a shame to see one fall because a single bad apple sits at the top of an otherwise fine tree.

But as I said above: between my personal connections to those who vouch for the nature of Kopf, and the, shall we say, Bill Cosby-level of indictment that swirls around the man, Unshaven Comics need not argue with the Devil to make up our minds. There are plenty more fish in the sea. And until this particular piece of chum is removed from the hull of the show he created, our lines will be cast in cleaner waters elsewhere.