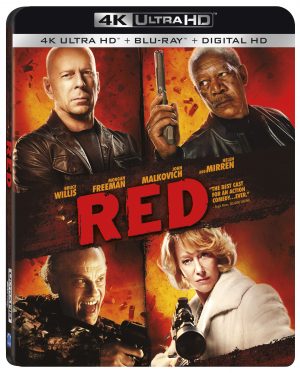 Both movies are available for the first time on 4K Ultra HD, which provides over four times the resolution of Full HD and includes High Dynamic Range (HDR) to deliver the brightest, most vivid and realistic color with the greatest contrast. The 4K Ultra HD Blu-ray will also feature Dolby Vision™ high-dynamic range imaging and Dolby Atmos immersive audio. Dolby Vision transforms the TV experience in the home by delivering greater brightness and contrast, as well as a fuller palette of rich colors. Together with the captivating sound of Dolby Atmos, consumers will experience both cutting-edge imaging and state-of-the-art sound technology for a fully immersive entertainment experience. The exhilarating thrillers RED and RED 2 will be available separately on 4K Ultra HD Combo Pack for the suggested retail price of $22.99 each.

Frank (Willis) is a former black-ops CIA agent living a quiet life alone…until the day a hit squad shows up to kill him. With his identity compromised, Frank reassembles his old team – Joe (Freeman), Marvin (Malkovich) and Victoria (Mirren) – and sets out to prove that they still have a few tricks up their sleeves. Stand back and watch the bullets fly in this explosive action-comedy. 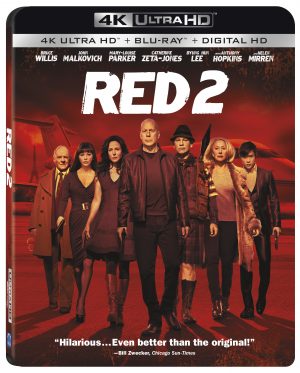 Retired black-ops CIA agent Frank Moses (Willis) reunites his unlikely team of elite operatives for a global quest to track down a missing portable nuclear device. To succeed, they’ll need to survive assassins, terrorists and power-crazed government officials, all eager to get their hands on the superweapon.