King Arthur: Legend of the Sword Arrives on Disc in August 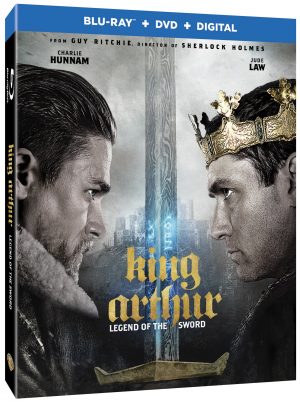 Burbank, CA, June 26, 2017 – Don’t miss the royal showdown when King Arthur: Legend of the Sword arrives onto Blu-ray Combo Pack, DVD and Digital. Acclaimed filmmaker Guy Ritchie brings his dynamic style to the epic fantasy action adventure King Arthur: Legend of the Sword. Starring Charlie Hunnam in the title role, the film is an iconoclastic take on the classic Excalibur myth, tracing Arthur’s journey from the streets to the throne.

Guy Ritchie (The Man from U.N.C.L.E., the Sherlock Holmes films) directed the film from a screenplay by Joby Harold (Awake) and Guy Ritchie & Lionel Wigram, story by David Dobkin (The Judge) and Joby Harold.  The film is produced by Oscar winner Akiva Goldsman (A Beautiful Mind, I Am Legend), Joby Harold, Tory Tunnell (Awake, Holy Rollers), and The Man from U.N.C.L.E. and Sherlock Holmes producers Steve Clark-Hall, Guy Ritchie and Lionel Wigram.  David Dobkin and Bruce Berman are executive producers.

Additionally, all of the special features, including interviews with filmmakers, new original shorts, featurettes, and deleted scenes, can be experienced in an entirely new, dynamic and immersive manner on tablets and mobile phones using the Warner Bros. Movies All Access App, available for both iOS and Android devices. When a Combo Pack is purchased and the digital movie is redeemed, or the digital movie is purchased from an UltraViolet retailer, the Warner Bros. Movies All Access App allows users to watch the movie and simultaneously experience synchronized content related to any scene, simply by rotating their device. Synchronized content is presented on the same screen while the movie is playing, thus enabling users to quickly learn more about any scene, such as actor biographies, scene locations, fun trivia, or image galleries. Also, users can share movie clips with friends on social media and experience other immersive content. The Movies All Access app is available for download on the iTunes App Store and Google Play Store.

The Blu-ray discs of King Arthur: Legend of the Sword will feature a Dolby Atmos® soundtrack remixed specifically for the home theater environment to place and move audio anywhere in the room, including overhead. To experience Dolby Atmos at home, a Dolby Atmos enabled AV receiver and additional speakers are required, or a Dolby Atmos enabled sound bar; however, Dolby Atmos soundtracks are also fully backward compatible with traditional audio configurations and legacy home entertainment equipment.

When the child Arthur’s father is murdered, Vortigern (Jude Law), Arthur’s uncle, seizes the crown.  Robbed of his birthright and with no idea who he truly is, Arthur comes up the hard way in the back alleys of the city.  But once he pulls the sword from the stone, his life is turned upside down and he is forced to acknowledge his true legacy…whether he likes it or not.