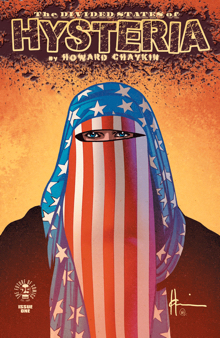 I didn’t think I was going to write about Howard Chaykin, Image Comics, and The Divided States of Hysteria. When the first controversy sparked up the beginning of last month I had already committed to an interview with a team working on a Kickstarter project for my column that followed said controversy. While people still talked about it some after I thought people had basically covered the scope of the issue and I wouldn’t have anything constructive to add.

Then this happened followed by this apology from Image Comics and Howard Chaykin. I tend to discuss these sort of occurrences in the comics community and I really haven’t lately so it’s time for me to get back to that.

Full disclosure: I have met Howard Chaykin before at a few conventions, got a Lois Lane sketch from him some years ago, and attended a panel back at the first Special Edition NYC spotlighting him with fellow ComicMix columnist Martha Thomases in which he recommended we read the Tom De Haven novel It’s Superman which is actually quite good and one of the best things you’ll ever read that stars The Man Of Tomorrow. 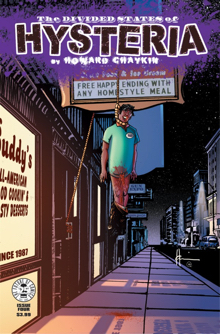 I don’t want to rehash all the details you likely already know, and if you are somehow into comics enough to read columns on comic book news sites and are not aware of what’s been going on, it’s covered in the links provided. You can also type in keywords in a Twitter search and find plenty on this. So, rather than restate the information, I’ll tell you how I, someone that discusses diversity in comics and adjacent topics, read this situation.

First, nobody is ever obligated to purchase and enjoy a comic. Period. If people see a cover or an image from a comic that makes them not want to read it, they don’t have to. They’re allowed to voice their displeasure and tell their friends and the Internet they don’t want to read it and you shouldn’t either. People are allowed to look at a comic and decide against it without reading it. 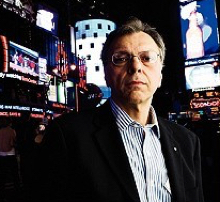 It’s up to the marketing people and the publisher to convince people that their product is worth their time and to spend money on it. Part of the blunder that took place here is that Image had worked out getting The Divided States of Hysteria a Pride variant when the content inside didn’t fit for that audience. More eyes, including a lot more queer eyes, were on this book because of that variant and it being Pride month. Had this book come out without that variant and later on in the year I think it may have glided under the radar a bit and while their likely would have been some backlash, it wouldn’t have hit the same levels.

Another factor is that this is an Image comic. While Image does have some gruesome books like The Walking Dead, most of its line-up is pretty accessible to a wide comics audience. A publisher more well known for its over-the-top stories and graphic imagery like Avatar Press may have been able to take on The Divided States of Hysteria with less backlash. 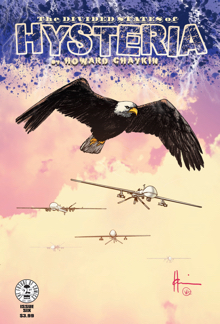 The political and cultural environment is just not where this book is either. People are upset, depressed, and frightened by what we see coming out of the White House; I know I am. Had the results on November 9th, 2016 been different then maybe people would have been a little more open to the idea of a comic that’s talking about a horrible alternate reality. It hits a little too close to home for many right now.

The timing of this book was way off. Particularly with the portrayal of a trans sex worker being brutalized. What may have seemed edgy or even acceptable decades ago in terms of representing a trans character doesn’t fly anymore. At least fourteen trans women, mostly trans women of color, have been murdered just for being trans this year, and more trans women were killed in 2016 than in 2015. I encourage you to follow the link in the last sentence and to read the names of those we’ve lost. Audiences not only are demanding more from trans representation in all media, but it’s necessary and can save lives. 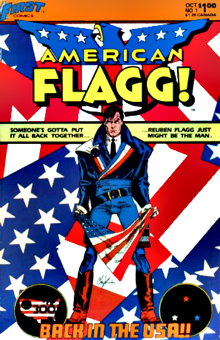 Finally, I want to talk a bit about Howard Chaykin himself. Some people have criticized him for being “an old white guy.” While there is some truth to that, it’s a bit more complicated. Howard Chaykin was born October 7th, 1950. He had a rough childhood moving many times as a kid across New York City, being raised on welfare, finding out later in life that who he thought was his biological father was in fact not and having a cruel adoptive father.

Despite all that, and despite the fact that many doors shut in front of him as he tried to develop his career early on because he’s Jewish, Howard was able to get his start in comics before branching out into other media. One of his early works, American Flagg!, was also a political satire and starred Reuben Flagg, an overtly Jewish lead at a time where that was far from common in mainstream comics. Hell, it’s uncommon now. That work, in particular, went on to inspire multiple generations of comic creators, including Warren Ellis, Matt Fraction, Frank Miller, and Brian Michael Bendis.

I’m not writing all this to make you change your mind on The Divided States of Hysteria. If you don’t want to read it, don’t. If you don’t like Howard Chaykin’s work, continue to not like it. If you want other people to know you feel that way, let them know.

What I am saying is that he is a person, he’s fought his own battles for decades to get where he is, he may have been through more than you know, he and Image Comics are in no way advocating bigotry, there is absolutely no need to make personal attacks towards Howard, and his entire body of work should not be summed up in one poorly timed and arguably poorly executed comic book.