Marc Alan Fishman: That Moment That Makes You Feel Mortal

We here at ComicMix deal part-in-parcel with the capes and cowls. Super-powered beings who defy conventional laws of science, completing miraculous acts to save humanity from heinous villainy. Most folks on the outside looking in suppose that the fascination with our superheroes stems from the desire for escapism. Faced with our own mortal foibles and faults, we lust for the life that defies those insecurities – with laser vision, super strength, or any number of special skills and powers.

But I’d argue that while there exists that sci-fi appeal where our inner kid seeks out that which is totally cool, it’s those moments on the page (or on screen) where our heroes are most human that we truly find the best part of pulp fiction.

Bruce Wayne was a just a boy enjoying an amazing adventure at the movies with his parents. Depicted at an age where mom and dad were his heroes, we see the glee and unencumbered joy in his innocent face as his family exits the Monarch. Two flashes from the muzzle of a darkened revolver later, and Bruce loses everything. His heroes. His joy. His mentors. His innocence. His world shattered, we watch as he rebuilds himself in the name of justice and vengeance. 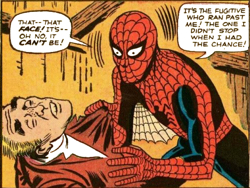 No matter what comes afterward – be it countless battles with colorful rogues, surviving devastating Earthquakes, or even accidentally being implicit in the destruction of the Justice League – we ultimately land back at those two shots fired that turned a boy into a lost soul. To change that origin, to remove that moment of mortality is to remove the sympathy that defines the single goal of Batman.

Peter Parker, imbued with the science-defying super-human properties of a spider, is able to become the antithesis to his normal self. A shy and introverted kid is given the power to let his id free. He gallivants to a local wrestling show to use his newfound powers for ill-gotten gains. I’ll spare you the rest; you know it all too well.

With the murder of dear Uncle Ben, Peter adopts the adage with great power comes great responsibility. That lesson, seated at the core of Spider-Man, is the moral nugget that defines the love we have for the character. Beyond all the web-slinging, trash-talking, and Mary Jane saving comes the guilt of a kid whose choices led the biggest loss in his life. That moment, that slip, makes the Amazing Spider-Man mortal.

In any story worth its salt, the conflict that arises must hold with it some connection to humanity. Be it man versus man, versus nature, or even versus himself, we as an audience must connect to something being presented in order to root our potential appreciation. When I think of a bad comic, a bad movie, or a loathsome TV show… more often than not what ultimately drags it down is that disconnect.

Think fondly of Star Wars: A New Hope. The retread of the heroes journey – reimagined as an epic space opera this time around – gives us Luke Skywalker, Princess Leia Organa, and Han Solo as our surrogates. The kid with wanderlust. The leader protecting her people. The asshole just trying to make a buck and live to see tomorrow. Through their eyes and actions, we see mortals with fears and dreams. We travel with them and succeed where they succeed.

Now, think of The Phantom Menace.

For the Star Wars apologists, I won’t deny there were attempts at adding a touch of humanity to the over-glossy under-written prequel. Anakin Skywalker is forced to choose between training with the Jedi or remaining a slave. He leaves his mother behind. Beyond that? Find me some mortal moments amidst the trade negotiations, pod-racing, and droid army fights. Good luck with that. Simply put, devoid of any real reason to care for our would-be Vader and pals… we get a wooden movie with a heart harder to find than on a Tin Man.

To close the loop, it’s this message: That moment that makes you feel mortal that cements my own work in completing The Samurnauts. As our pastiche to the Power Rangers and super sentai series abound, it’s been creating these moments throughout the mini-series that I hope sets us apart from the normally vapid source material from which we draw upon. By giving each of my heroes’ moments of doubt, dread, fear, pain, or suffering, I present to my would-be audience a cast of characters they can relate to. Beyond the wicked-cool immortal monkeys, giant robots, and Photoshopped blaster fire is a story about people trying to overcome their lesser selves. Whether they succeed or fail… so long as I show it on the page, I’m confident of the quality of the end-product.

No paper cuts necessary to see me bleed.