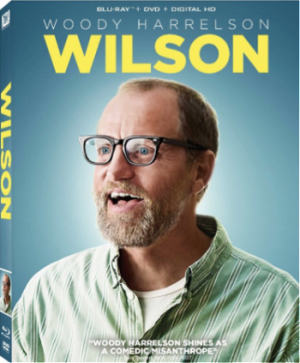 We all like to root for the underdog, especially if it is someone we, the audience, feel is being unjustly treated by a cruel, uncaring world. So, sitting down to Wilson, the film adaptation of Daniel Clowes’ graphic novel, we’re predisposed to cheer for the title character, especially as portrayed by Woody Harrelson.

Unfortunately, we get a soft, gooey portrayal of a misanthrope who brings much of the misery upon himself, surrounding himself with ill-defined characters. The 94 minute experience is at times uncomfortable and other times you shake your head at the missed opportunities.

The 2010 graphic novel is comprised of 70 single page gag strips about Wilson, inspired in part by his own father’s death as well as the relationship between Peanuts creator Charles Schulz and his father. Days and years pass in Wilson’s life between these vignettes forcing you to guess what has happened. In some ways, the film works in the same frustrating manner.

The film, out now from 20th Century Home Entertainment, focuses on Wilson, a down on his luck guy who loses his father to cancer then goes in search of his past by tracking his ex-wife where he learns the abortion that ended their marriage never happened. Instead, she gave away the child, now a teen, and they go in search of her.

Laura Dern looks appropriately strung out as Pippi, his ex, who is variously described as a crack whore and lunatic. She left Wilson, gave up her daughter, and tried to stay straight as a waitress. When Wilson finds her, she crumbles around whatever she originally found in him to love. As a result, she gives in all too readily and all too often, when he wants to love her or find their daughter and then pursue a relationship with her. Later, time passes and her situation changes with no real explanation, undercutting our appreciation for her struggles.

Harrelson gives the part his all, but is ill served by Clowes script. The story is fine but there’s little to like about Wilson, who is rude, arrogant, befuddled, and stressed out depending upon the scene. After being arrested for allegedly kidnapping Claire (Isabella Amara), he transitions to a three year stint at prison. There, he seems to find God or bond with every sub-culture in the prison population, softening his edges at last, so in the final act, he can find some solace. There’s a better story hidden under all this but Clowes won’t show us. His adaptations of Ghost World and Art School Confidential are far superior.

Had this been in the hands of a surer director, such as the originally-planned Alexander Payne, we might have been given that better movie. Instead, we get relative novice Craig Johnson, making just his third feature. Therefore, performances by Judy Greer, Cheryl Hines, and Margo Martindale are wasted.

We veer from slapstick to sentimental and the entire final portion of the film shifts tone into something sappy. The entire production lacks focus, direction, and even a point. As a portrait of a middle-aged man lost in the world, it has more promise than actual delivery.

Overall, the film looks and sounds fine on Blu-ray, coming as part of a Combo Pack that also includes a DVD and Digital HD code.

Given that the film was a box office and critical disappointment, it’s no surprise that there is a paucity of special features. We do get 15 Deleted Scenes, some of which would have helped the overall story but none are entirely missed. There are also a photo gallery and trailers.