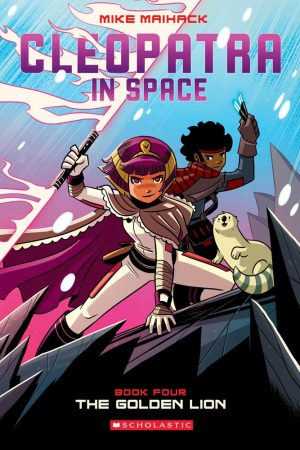 Mike Maihack has been receiving glowing notices with every release in his Cleopatra in Space series of graphic novels from Graphix. When the first was released in 2014, I was highly critical of it since it had no bearing on the historic Cleopatra. I found the second outing better but still not as great as others thought.

For some reason, the third book, Secret of the Time Tablets came out last year and we missed it. As a result, I approached book four, The Golden Lion with some trepidation. Graphix has a bad habit of releasing subsequent volumes in a series without a recap and given the year between releases, this is unforgivable.

We open some time after the events in book three and clearly, things went badly since Cleopatra did something she shouldn’t have and this time her classmate Zaid died as a result. One would think she would be learning her lesson but instead, we see her training hard, punishing herself for whatever went sideways. However, the moment she is summoned, and told of the fabled Golden Lion being located, she foolishly heads to an alien world ill-prepared and alone meaning she has learned nothing.

This makes her less likable and undermines the light tone and fast pace of this book. Maihack is a talented artist who can move thins along nicely although there are entire sequences that are bloated so when we need to open up others, such as some of her later confrontations with a bounty hunter, everything is crammed and hard to figure out what’s going on. Some art direction would have helped immensely.

The Golden Lion is a shooting star with a long tail that is part legend and part of another prophecy that seems to involve Cleopatra, who is clearly not the Egyptian queen-to-be, but instead some other person. Anyway, evidence now points to a moon orbiting a world Cada’Duun. Since this star is considered a source of immeasurable energy, getting to control it before evil forces get to it becomes a priority.

But Cleopatra races ahead of everyone, landing on the frigid world completely unprepared for the cold and how it saps the life from her equipment. Thankfully, before she can freeze to death, her frequent companion Antony turns up, there for secret reasons of his own. Together they discover the underground (and warm) civilization that apparently speaks in algebraic equations. Antony can speak it while Cleopatra can only cuddle with her new pet, a snow otter named Mihos.

Of course a new agent, Ophois, has been dispatched to get the Golden Lion first and a confrontation with our plucky (and empty-headed) heroine is coming. There are agendas, schemes, and plans whirling in the background of this series. We’re four books in and clearly it’ll be four more before anything gets resolved. As a result, this is more an episode than a graphic novel and for the price, it should be far more self-contained. But Maihack isn’t entirely to blame for this since Graphix does this with most of their series which is a disservice to their young, enthusiastic readership.