Marc Alan Fishman: It Ain’t Over ‘Till The Fat Guy Sings 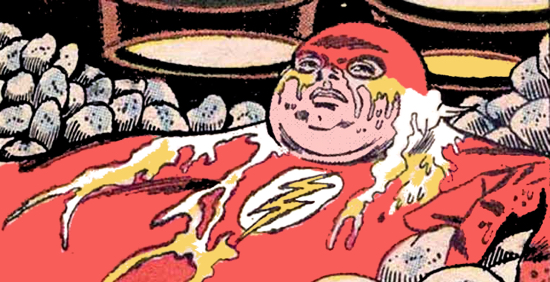 I’m half the man I used to be.

OK, more like 2/3rds, but that’s being picky, no? Let me be blunt: as much as I shamelessly self-promote Unshaven Comics, The Samurnauts, and any wares for which I am able to shill, patting myself on the back honestly is uncomfortable territory. This week, I’m letting my guard down in a way that frankly I’m afraid to. There’s no use in hemming and hawing over it here in the preamble though. And spoiler alert. I get a little long in the tooth this week, but I’m hopeful you’ll find it… inspiring? Avante!

My name is Marc Alan Fishman, and I am a fat, fat man. Or perhaps it’s better to definitively declare it: I am, after a year’s work… a less fat man. If you particularly care about numbers, I’m fairly certain, to date, I have dropped a bit more than 80 pounds. Some people would dare say it’s closer to 90. I’m not one of those people, but hey, it’s a good rumor to spread.

My personal health has been a boring-as-hell roller coaster ride in reverse; plummeting in a freefall of increasing fatness from middle school ending at some point around 2011. For those playing at home, that included college, dating and then marrying my wife Kathy. In 2011, I was hospitalized due to kidney stones – truly a pain comparable to reading issues of Flashpoint. Whilst my body expelled sharp rocks out of my nether-bits, I was met with the trifecta of diagnoses: high blood pressure, high cholesterol, and type II diabetes. The best part of it – it didn’t come as a shock at all.

I never knew my Grandpa Meyer Fishman. He died of a heart attack. My own father had one himself, survived, but wound up with a quintuple bypass in his mid-forties. The writing had long been on the wall, and I figured why fight the universe? This lead to a life of fast food, bad choices, and an aversion to physical activity akin to the Hulk’s aversion to normal-colored trousers.

But you see, the story only truly begins in 2011. For the next year, I righted the ship. I ate according to strict rules. I took my blood sugar twice a day. I logged in food and personal data religiously. And I dropped a considerable amount of weight. I purposely never found out how much I’d tipped the scale at when I was hospitalized. I figured it never did me any good to quantify being one foot in the grave. Then, in 2012, a new-lease-on-life Marc Alan Fishman received his fair share of cat calls and back-pats. But they truly felt hollow. The work I’d done was merely to eat less crap. Nothing more. The new state of being was medically-sound, but empty in the soul. And so, slowly, I gave up the good fight.

One bad decision here, one little cheat there, and slowly over the next four years I’d put back on nearly everything I’d lost. I gave myself every excuse in the book. My day job was stressful. We’d had a kid. Unshaven Comics and freelance designing rendered my work day as 18 hours on the clock out of every 24. Flashpoint sucked. It was hot out. That guy over there looked at me funny. The McRib was still not a menu staple.

May 8th, 2016. My pants – which came with the fat-guy-secret-shame elastic waist band – were pulled to their limitations. My wardrobe consisted only of stretched-out henleys, and graphic tee-shirts that had seen better days. Going to restaurants became secret panic-attacks in anticipating being sat in a booth. And, like the unnamed narrator in Fight Club, somehow, I reached bottom. I typed a letter to myself. An op-ed directed solely at myself, you see. And in it, I pulled no punches:

I know the truth: I fell off the wagon HARD, for no real reason. I succumbed to temptation because no one I know is comfortable calling me out on it. But I don’t blame anyone; I’m my own worst enemy. I’ve always been it. I’ll always be it. Cold hard facts: My lifestyle has gifted me gout, diabetes, and most recently… the reminder that I’ll only request seating at a “table,” as I don’t fit in the booths anymore. It’s embarrassing, and I need to quell it.

And with that, I made the commitment to change. My mantra was – and still is – very simple. I vowed to make small, significant changes to the way I live. To capture the food I eat, the mood I’d been in, and the exercise completed each day, without fail. To commit to completing some kind of exercise every day, without fail. To eat better food, in better portions… and to never think of food as a reward or punishment. And to commit to all of this knowing that unlike before: this wasn’t a sprint, nor a marathon; this was to be the way I’d strive to live until my brain could be successfully transferred to a cyborg body in 2039.

Over the course of a year (and change, natch), each little change begat another, and then another. I started taking walks outside last summer. When daylight savings hit, I bit the bullet and bought a gym membership. When I realized I was (and still am) far too embarrassed to lift weights next to other actual humans, I built up a collection of weights and such at home. I started out completing very small workouts a few nights a week. Then it grew to a nightly routine. Paired with my one hour of TV before bed, I force myself to complete a little workout during commercials. A few sets a night have seen me reach personal lifetime best numbers that have continued to rise. I even hired a wellness coach to help me fill in the gaps where I’d continued to stumble.

And so, I end on an inspiring note not to you, my friends and fans reading this. I end on an inspirational note to myself: It took a year to completely change who I am outside and in. With that same determination, the same successes can translate to Unshaven Comics and The Samurnauts. To be the better Marc Alan Fishman means to give the best back to the world. If I want to see my products be what I know they can be? I need only continue to make small and significant changes to how I work. Nothing comes to those who wait for the world to change. Make the change yourself, do the work, and reap the rewards when you’re finally able to lift your head up.