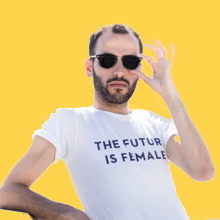 Okay, let me clear up a couple of things first.

One: This is not about the song “Amazing Grace” by poet John Newton. It’s about comic book professional Sina Grace.

Two: I shamelessly took the concept of this column title from Christmas at Pee Wee’s Playhouse when Globey says that in reference to Grace Jones’ performance of Little Drummer Boy.

Now then, if you aren’t familiar with Sina Grace I’m here to help change that. Especially since Sina has a few new comics hitting the shelves on Wednesday. 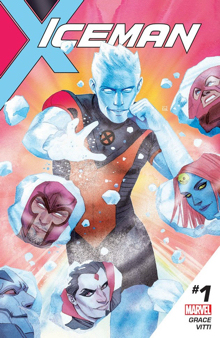 He’s someone entirely unique in comics. He’s worn nearly every hat you can in comics as a self-publisher, imprint editor, writer, and artist. His skills have graced most of the comics publishers here in the States that you can name, he’s edited The Walking Dead, put out deeply personal memoir comics, and is most recently taking on Iceman over at Marvel… but more on that later.

I first got into Sina Grace’s work as an artist with The Li’l Depressed Boy, written, colored and lettered by S. Steven Struble. He happened to be in Manhattan signing at Carmine Street Comics in 2014 just after my birthday so I picked up the first two volumes. He was incredibly sweet and welcoming. I even got a sketch of Jem (as in Jem and the Holograms) from him, which he seemed to look up reference for on his phone, but I like to think he could have done from memory. Fun fact about me; I prefer this version of the Jem theme song that basically everyone else hates.

Sorry, I’m getting sidetracked. Anyway, The Li’l Depressed Boy is a surrealist take on unreqited love with an indie film aesthetic filled with music and youth. It’s the kind of comic that checks a lot of boxes for me in terms of what I like, so it both was a comic I enjoyed and something that put Sina on my radar. 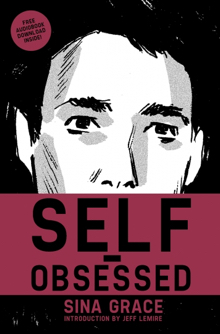 That really paid off when Self-Obsessed came out in 2015.

Self-Obsessed is a deeply person memoir. Prior to this, Sina had put out another memoir, Not My Bag, back in 2012. Whereas Not My Bag dealt with Sina’s personal struggles working retail, Self-Obsessed cuts deeper. It’s filled with comics, essays, photos, and interviews. It’s an incredibly blunt, raw, and unapologetic reflection on life. It’s a brave graphic novel and I have a great deal of respect for Sina putting this out. If you like memoir comics and the kind of books you see over at the likes of Top Shelf and First Second and you haven’t checked out Self-Obsessed yet, then you need to add it to your list. Seriously. Do it.

Sina Grace was back in New York for NYCC in 2015 to promote Self-Obsessed. Needless to say, I picked up a copy then and read it on the train home after. Self-Obsessed went on to become a web series starring not only Sina but Amber Benson, Colleen Green and more. It’s currently two seasons in.

I’m stressing how much I enjoy Self-Obsessed not only in the hopes that maybe you’ll go pick it up but because his new graphic memoir, Nothing Lasts Forever, is one of his new books hitting the shelves Wednesday and may turn out to be even more personal than his other memoirs. A lot has happened fairly recently in Sina’s life and he’s gonna lay it all out for us. I’ll be picking it up on Wednesday, and I hope you do the same. 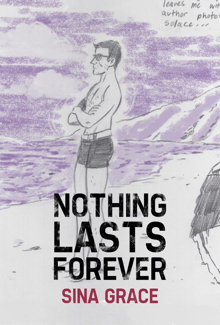 One of the other books with Sina’s name on it coming at us on Wednesday is Iceman #1. This book is part of Marvel’s X-Men ResurrXion reboot. Now, I made my feelings clear the other month based on the first book in the series, X-Men Gold #1. TL:DR, I wasn’t a fan. X-Men Blue #1 was better, but still not quite there for me. And I’ll be honest, I picked Jean Grey #1 off the rack at a shop and skimmed through it only to find that in the first issue they are already talking about the Phoenix force so I’m gonna hard pass that one. No offense to the creative team, really, but the idea of dealing with the Phoenix force again is just too exhausting and a wasted opportunity to make Jean Grey something more. Because of all that, I’m relying on Iceman to restore my excitement in the X franchise.

Seriously though, this book has a lot going for it. Though editor Daniel Ketchum has been let go from Marvel, this is certainly in part his baby. I got to talk to Daniel briefly back at NYCC 2015 about Iceman and my reservations to how the character had been handled in All-New X-Men. Daniel told me to stick it out and see where the character was going. This book is where it was all going. Between Daniel Ketchum editing, Sina Grace writing, and Kevin Wanda doing the cover, we have three queer men of color working on a queer superhero. That’s really huge and means the world to me. Many of you familiar with my column know I bitch about diversity and inclusion here a lot, and Iceman is the kind of book I’ve been demanding over at that big two. Please, if diversity in comics is important to you, or if the X-Men are important to you, pick up this book. We all need Iceman to succeed. 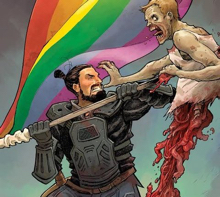 Finally, Sina also did a pride variant cover for the latest issue of The Walking Dead and it’s gorgeous! Image is doing pride variants for multiple titles, and 100% of the proceeds will go to the Human Rights Campaign. Considering the kind of rollbacks in LGBT rights we see happening all across the country, this is an important stand for a comic company to be making and I applaud Image for taking a stand against bigotry.

This Wednesday, comic shops will be stocking up on three different projects that Sina Grace has poured his heart into. When you hit up your local comic shop tomorrow, go out and take some of those home with you.