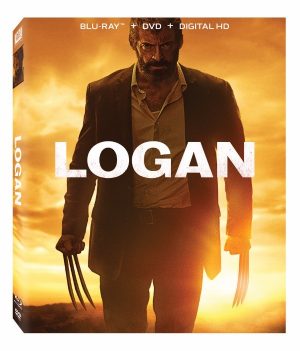 Given how incredibly popular Wolverine has been since his introduction in comics forty years ago, it’s always been a little odd that he has not fared well on the silver screen. While he’s been one of the strongest elements in all the X-Men films to date, his solo offerings — X-Men Origins: Wolverine and The Wolverine – have not exactly worked. Hugh Jackman has said he had one solo film left in him so the challenge for Director James Mangold was making this one good.

Thankfully, Logan, was more than good. It was a thrilling experience on screen and now on home video. The movie, out now from 20th Century Home Entertainment, works on multiple levels but is a fitting finale for Jackman’s portrayal of the canucklehead. Where the others were solo stories with lots of extra characters around, this is more of a buddy film with the first half focusing on the relationship between Logan and Charles Xavier (Patrick Stewart) and the second half with his sort of daughter Laura (Dafne Keen). 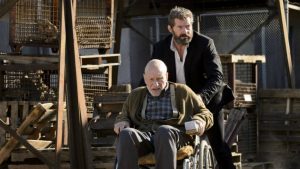 We leap ahead to 2029, a world where mutants haven’t been born in twenty-five years, and where most of the existing ones are already dead. Xavier is dying, both from old age, and metal disease that has turned his psionic abilities into deadly force that has to be treated medicinally. He’s squirreled away in an abandoned Mexican refinery, watched over by Caliban (Stephen Merchant). Logan, the adamantium covering his bones, is slowly poisoning him so he’s finally aging and his healing factor is not what it used to be. To support his drinking and Xavier’s drugs, he drives a limo in a world that has seen better days but has not yet slipped into total dystopia.

There meager existence is upended when Logan is approached by Gabriela Lopez (Elizabeth Rodriguez), toting a young girl with her. She is on the run from Transigen where she worked as a nurse and the girl was raised in captivity. She appeals for Logan’s help but he wants nothing to do with her, no longer a noble figure but a broken hero. However, things change when Transigen’s enforcer Donald Pierce (Boyd Holbrook) warns Logan off and Lopez is soon dead. 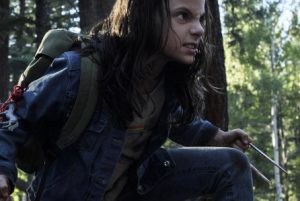 Pierce is out for the girl, Logan, and Xavier so the chase is on. The buddy film is merged with a road race as Logan tries to keep them safe while slowly learning that Laura and the others were raised from mutant DNA experiments, making her his genetic daughter, altering his view of things.

Several of the children have escaped and gone to Eden, a mountain retreat, reportedly revealed through an X-Men comic so Laura convinces Logan to bring her there but along the way, they are stopped by a clone of Logan, dubbed X-24, and there is death and destruction in their wake.

Mangold paints a bleak portrait of a world without heroes and a man without a future. There’s a sense of hopelessness that pervades the story and it takes a youth to awaken the hero within. The writing gives everyone plenty to do and other than a stop at a farmhouse for dinner, the pacing is excellent. 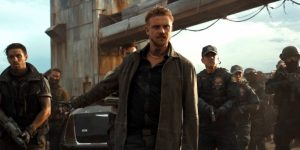 Jackman and Stewart play off one another exceedingly well, a familiarity born from their previous work together. They bicker like the tired old men they are. As a result, the real revelation in this film is Keen, who is expressively silent during the first two-thirds of the film. When she speaks, though, it changes their dynamic and adds a new layer.

Interestingly, the combo pack comes with two Blu-ray discs – the film itself and Logan Noir, a black and white version that is chilling in its own way. The film can also be found on the DVD and the Digital HD code.

The AVC encoded 1080p transfer in 2.38:1 is superb, sharp, and near perfect. Coupled with Logan’s DTS-HD Master Audio 7.1 mix, you have an excellent home viewing experience.

The special features include a handful of Deleted Scenes (7:45) with optional commentary by Mangold. Of these, only one could have made the film better. There is a multipart Making Logan (1:16:05) that breaks down the film from its origins in Old Man Logan and the X-23 storylines in comics to the casting process (Deen’s screen test is well worth a look) to production. Finally, there is a strong Audio Commentary by Mangold (which is repeated for Logan Noir).

If this is truly Jackman’s farewell to the character, he couldn’t have asked for a better story to share with his audience.