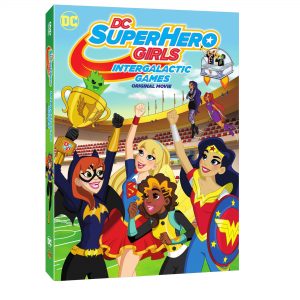 What a great time to be a grandparent (or so I’m told). There are now plenty of books, games, clothing, and video to encourage girls to be strong and independent. DC Comics offers up their Super Hero Girls line and this week they have released their second animated feature, DC Super Hero Girls: Intergalactic Games, a 77-minute romp.

Writer Shea Fontana improves on the first offering with a story set at the Intergalactic Games where Earth’s powered women take on the vile challengers from Korugar Academy. To prepare for the competition Academy teacher Doc Magnus (Phil LaMarr) is building battlebots and supervising Batgirl (Mae Whitman) and Bumblebee (Teala Dunn) as they build their own. Principal Waller (Yvette Nicole Brown) is not amused nor is she happy that Magnus’ bots seem to have free will but were not programmed with any morality, a theme that plays out across the 77-minute fast-paced story.

So, right there, teens and adults more familiar with the comics than the target audience will love the characters plucked from throughout the DC Universe continuity. There are plenty of other little asides such as Steve Trevor’s Capes & Cowls Café.

Thankfully, it’s not just mindless action before, during, and after the competition. Fontana nicely weaves in all the inter-person drama one would expect when mixing all these characters together. Everyone does not get along nor are things overly simplified for the young viewer.