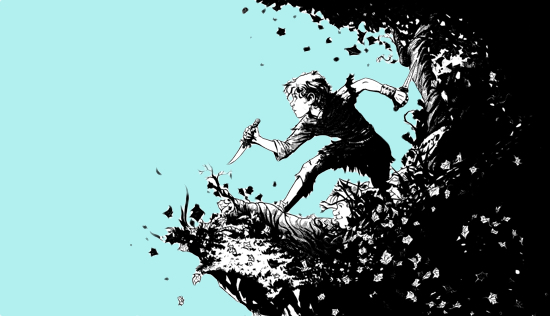 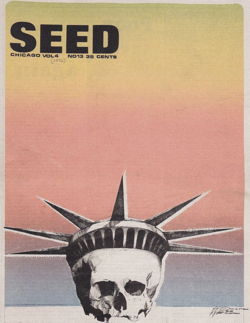 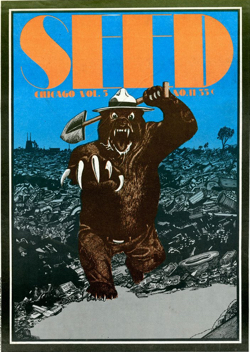 I just returned from a family reunion, and it was just about the only type I’d go to. It was a reunion of the various staff members of the Chicago Seed, the high-circulation “underground” newspaper published between and 1974.

This gathering of geriatric hippie revolutionary writers and artists was prompted by the recent deaths of two Seedlings: Snappy Skippy Williamson and Jayze Jay Lynch . I discussed the passing of my two long-time friends in this space; click on the above links if you missed those columns or if you have the desire to commit my words to memory.

Joining the Seed staff in January 1969 was the single most important step I have taken in my life, short of marrying Linda. I was 18 years old, a political organizer, a professional writer (thanks to those $5.00 checks from the Skokie News), a counter-cultural warrior and a kid tired of being pushed around by the jocks and the holy-holies. Within a few months, I was recruited to join the staff of the Conspiracy Trial. By the end of the year I was on radio as well. I did a whole lot of travelling and speechifying and fundraising for the Conspiracy Trial, all the while continuing to write for the Seed, as well as for New York’s East Village Other, the Los Angeles Free Press, the Berkeley Barb and, later, the Berkeley Tribe, the New York Rat (awesome name, edited by the gifted Jeff Shero), Liberation News Service, and the Black Panther Party newspaper.

Yes, you read that last part right. In 1970 it was easier for a white hippie boy to write for the Black Panther Party than, say, a black person to write for the hallowed-but-hypocritical Village Voice at that same time. If all you know about the Black Panther Party is what our popular media reported back then – largely quotes from the professional liars at J. Edgar Hoover’s F.B.I. – then you don’t know shit about the BPP back then. But I digress.

I was fortunate enough to work under the tutelage of Abe Peck, the finest editor I’ve ever had. He went on to work for Rolling Stone, The Chicago Daily News and The Chicago Sun-Times before becoming a full professor at Northwestern University’s Medill School of Journalism.

I would have attended this reunion if Abe had been the only person there. 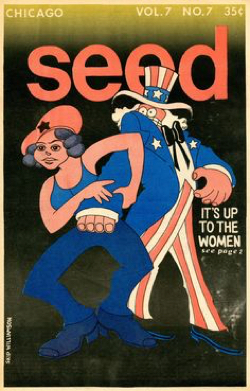 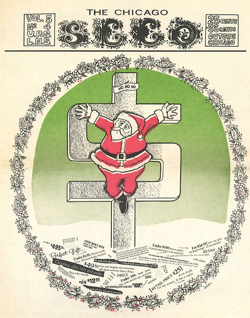 Like many such publications, The Seed was a combination of left-wing politics (as defined at the time) and the then-burgeoning youth culture. I covered both sides, as did most of my cohorts. Under the tutelage of editor Abe and, later, Marshall Rosenthal, I became a better writer. I also learned layout and design and I learned how to edit comics though my work with Skip and Jay and others.

Almost 50 years later, I look back at those seminal days with fondness and pride. But, as fate will have it, I doubt I’d seen most of those folks in the past, oh, 40 years or so.  Walking in the Atlantic Bar’s party room was a bit of a challenge: all of us were five decades older, and most of us kinda look it. We had name tags, but our eyesight was no longer strong enough to make identification easy in the darkened bar. Many were retired or semi-retired. Most of us had kids, many had grandkids. Of course, Jay and Skip weren’t the only ones too deceased to make it to the party, and that’s sad. Some of us had seen others of us at sundry memorials, but in the aggregate the roll call for the dead was excruciating. That’s part of growing up.

But… That’s the one thing most all of us still had in common. Not just our politics and our many, many shared experiences, good and bad, but the fact that hardly any of us grew up completely. It was clear that we maintain the strong and important values we held back in the Sixties, tempered somewhat by experience.

Otherwise, we are still Peter Pan, flying through the skies with pen – well, laptop computer – at the ready, trying to help make the world a better place. We continue to grabble with the concept of “fairness,” which is something kids bitch about as they realize the world is not fair and something adults tell kids is just the way it is.

It is not. The adults are wrong. We Peter Pans know better. We know what should be and we have a good idea of how to get there. If you think that’s a foolish or unnecessary journey, wait a few months and ask any of the 24 million people who no longer have health insurance. Ask any of the women and men who had been dependent upon Planned Parenthood for significant portions of their health care. Ask any native-born American with a Muslim or Hispanic heritage.

ComicMix readers should get this. We all want to fly.