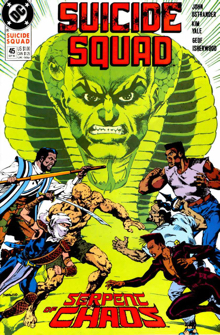 For the past few weeks we’ve been discussing the latest TPB reprint of my Suicide Squad run at DC with me giving some of my thoughts about what went into the stories. One of the things I like about this volume is that it gives a nice variety – there’s a four-part story arc, a single-issue story, another four-parter, and then a two-parter.

This week we’re going to focus in on the second four-parter, The Jerusalem Serpent. The villain of the piece is named Kobra, a Jack Kirby creation. He’s the leader of a cult-like terrorist group and had bounced around the DCU for a number of years. He was a made-to order bad guy for the Squad although I monkeyed with him a bit. In DC cosmology you had the Lords of Order and the Lords of Chaos (which, in itself, was patterned after the cosmology in much of Michael Moorcock’s Eternal Champion series). Doctor Fate, for example, was an avatar of the Lords of Order. So I made Kobra a follower of the Lords of Chaos, working to usher in the Kali Yuga- the Age of Chaos. The guy had a real Jones for it.

He was offset in the story by another character that we had brought into the Squad – Revan, who had originally been part of the Jihad, the super-powered terrorist for hire group we met way back in the first issue. Revan was a modern Thugee, from whom we get the term thug. He and Kobra both worshipped Kali which might make you think they were on the same side but Revan sought to delay the Kali Yuga while Kobra wanted to usher it in. This made them implacable enemies and they were described as the mongoose and the cobra. They were destined to fight to the death and, in this storyline, they do. Well, one of them does.

In this arc we also meet an Israeli band of superheroes, the Hayoth, all of whom were created specifically for this book. The Hayoth were the four living beasts of Ezekiel and Revelation in the Bible and, in this, I hear Kim’s voice. She knew Bible lore better than I did or do. 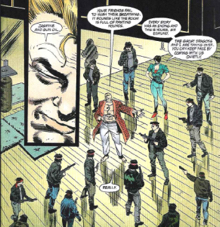 Their leader, and Waller’s counterpart, is Colonel Hacohen, also Mossad’s liasion with Hayoth. Its members included Judith, essentially a Jewish ninja. A man named Moshe Nachman was code-named Golem and had the ability to alter the chemical composition of his body to sand, mud, earth, water and so on.

The last two members are among my favorites: Ramban, who we described as a combat magician, and Dybbuk, an Israeli A.I. or Artificial Intelligence. Ramban is named for one of the great Kabbalistic magicians of old. A dybbuk, in Jewish folklore, was a possessing spirit. In this case, Dybbuk can possess other computers, machinery, just about anything that has electricity running through it.

Kobra gets caught in the early pages of the story and imprisoned by the Israelis but he has sent a message to the Americans: “The Age of Kali Yuga will dawn in Jerusalem.” Waller and the Squad are hired by an Egyptian official to find out what Kobra intends and prevent it from happening. So why does he care what happens to the Israelis? As the official puts it, they don’t want a madman like Kobra manipulating events to his own ends – ends that would not benefit the Arabs or the Israelis.

So Amanda Waller gets hired and she and her team must infiltrate Israel, something that is harder for some than others. A running joke throughout the arc is Deadshot and Boomerang trying to get there. They’re coming from the previous issue’s adventure in Australia and, because Boomerbutt insisted on getting a drink (or two or three or five) on the way to the airport, they’ve missed their plane. Their luggage, however, has gone on without them and then gets lost in the system. Deadshot’s uniform and guns are in his luggage and he is not amused. Harkness understands all too well that this could get him killed. 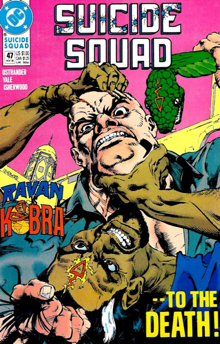 Waller is not amused either.

The Wall figures out early on that Kobra got caught because he wanted to get caught. The Israelis dismiss such a notion but Waller wants to figure out why and this gets us to the heart of this story and the reason its one of my faves.

The A.I., Dybbuk, is guarding Kobra 24/7 which gives the Avatar of Chaos a chance to engage in a dialogue with him/it. Dybbuk is an innocent, like Adam in Eden. He has no knowledge of Good and Evil. Kobra is the serpent seducing him. Is Dybbuk a person or a machine? Kobra convinces the A.I. that the only way to know is to determine a course of action and then choose to follow it through.

The course of action? Sending Israeli jets to destroy Islam’s third holiest shrine, the Dome of the Rock, which happens to be built on the ruins of Solomon’s temple. The Jews then will be able to rebuild the temple. In theory. Of course, it will also ignite the unholiest of Holy Wars – and usher in the Age of Chaos.

The Squad and the Hayoth battle each other while the Squad seeks to stop the jets’ attack but the real climax to the arc is a dialectical conversation between Dybbuk and Ramban, a philosophical discussion about not only making a choice but the value of making a moral one.

I hear Kim’s voice all over those pages; my late wife and writing partner knew the source material being cited and how to present it. The fate of the world depends on two beings talking and coming to the right decision. As Ramban says, “To know what to do is good, to know why you do it is better.”

Ah, that‘s the Squad I loved.

We’ll wind this up next week with the final story in the collection and that one centers on Oracle.