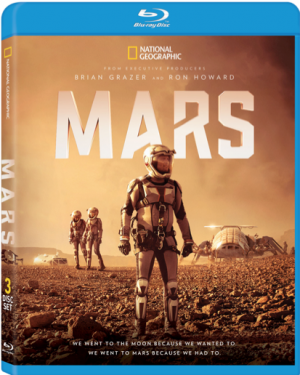 When some of the smartest people alive today insist we need to begin colonizing other worlds, you tend to believe them. When science fiction fans hear those words, we begin to salivate at the possibilities.

National Geographic cannily appeals to both audiences with their hybrid miniseries Mars, which mixes today’s science with tomorrow’s fiction by positing what the actual colonization of the planet, a mere 140 million miles away, might look like. Yeah, we got a glimpse of that in the adaptation of Andrew Weir’s The Martian, but this goes further and shows more of the risks involved.

The miniseries, out now from 20th Century Home Entertainment, is a captivating piece of work if unevenly assembled. You get all the usual suspects weighing in why and how we might get there including Space X guru Elon Musk and the ubiquitous Neil deGrasse Tyson. Accompanied by a Greek chorus of NASA scientists and engineers, we get a frim grounding on where we are today and what it will take (including how much and how long) to reach Mars and stay there.

With the firm guiding hand of Brian Grazer and Ron Howard – who took us to the edge of space with the gripping Apollo 13 – the fictional sections are visually interesting and feel like they could possibly happen over the next hundred years. The most fictional part of the story may be the notion that countries around the world can put aside their partisan issues in order to partner for such a project. Given the expertise and money required, it’s unlikely any one country can mount such a mission. Of course, it’s equally unlikely we can all come together fast enough to actually do it on the timetable envision by the likes of Stephen Hawking. That this story takes place in 2033 may be the most fantastic concept of all.

With a nice nod to Greek myth, the Daedalus is sent to Mars and we follow the crew, led by Ben Sawyer (Ben Cotton). The crew and their personal issues are far less interesting than the real science employed to get them there, which is a shame. After all, one reason America was captivated by the Mercury program was the canny PR done to turn the Mercury Seven into instant heroes, their every move followed by an eager public.

Obviously this was intended to be a utopian or dystopic view of life on other worlds, but the hazards and problems encountered are therefore representative, but also almost predictable, spoiling some of the dramatic satisfaction the fictional sections intended.

The sets and tech look fabulous as one would expect from the channel and production team. Watched as an AVC encoded 1080p transfer in 1.78:1, it looks great on the home screen accompanied by a serviceable DTS-HD Master Audio 5.1 mix.

The miniseries does boast a rather impressive physical (and/or CGI) production, with decently realistic sequences set on board the Daedalus and, later, on Mars itself. The fictional element’s “look” has obviously been highly influenced by The Martian (as can clearly be seen in some of the screenshots accompanying this review), with some individual shots looking like they in fact could have been lifted directly from the film. But again and again it’s the current day scientists and explorers who provide the most riveting information. As odd as it might sound, this is one miniseries that might have benefitted from a kind of “reverse seamless branching”, where viewers could choose to skip the fictional parts and stick to the facts and only to the facts.

The three-disc Blu-ray set comes with a handful of extras, starting with Making Mars (47:17) which does a fine job recounting how the mockumentary was made. There’s Before Mars – A Prequel (33:00) which offers up some welcome backstory for the dramatic portion. There’s the brief Before Mars Behind the Scenes (2:28); Getting to Mars (13:51); Living on Mars (10:26); More Mars (10:29); Behind the Scenes (14:38); and, Cast and Crew Interviews (25:06). Taken as a whole, the extras greatly expands our understanding of the nearby world, the difficulties in getting there, and how we might extend our stay. Additionally, the behind-the-scenes interviews with the production crew shows the meticulous detail that one expects from National Geographic.