My jealousy nearly deprived me of Girls.

Lucky for me, the backlash against her started almost immediately. She didn’t deserve her success, said critics, because her parents were famous and that gave her an unfair advantage. I felt quite comfortable ignoring the show. In fact, I felt cool, because only lame people follow crowds. 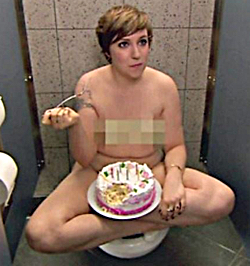 Real mature on my part.

My moment of truth came during the opening number of the 2012 Emmy Awards, which featured a peek into the ladies’ room. In a shot that is almost a throwaway, someone opens a stall and there, naked, sits Lena Dunham. Eating an entire cake. With her hands.

It was every nightmare I have ever had.

I admired her willingness to go there, to stand (well, sit) naked on national broadcast television. Like me, Dunham’s body is short, squat and generously padded. Unlike me, she didn’t seem to care.

If this were all there was to this story, there wouldn’t even be a story. I started to watch the series, and, at first, I didn’t understand why there was such a fuss. A series about four hipster twenty-something gifs in Brooklyn on a pay cable network that had just finished Sex and the City (about four stylish thirty-somethings in Manhattan) didn’t seem that daring to me. They were white and educated and had parents who were all capable of bailing them out of any problems they might have. They were pretty much the epitome of white privilege, and they seemed oblivious to it.

This turned out to be a feature, not a bug. A lot of the humor came from the obliviousness of the four main characters. 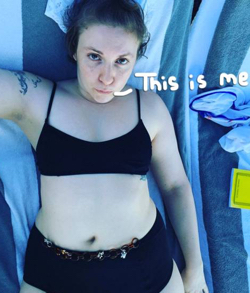 A lot of Very Serious People have written a lot of Very Serious Commentary about the generation dubbed Millennials. These kids want everything handed to them on a silver platter. They care more about their Instagram accounts than they do about real people. They don’t understand the meaning of hard work. They expect to be coddled. If you added a few insults about their hairstyles and choice of music, you’d have the exact same complaints that I’ve heard about every new generation for as long as I’ve been alive.

Young adults, just out of school, are assholes. It’s simply a law of nature. I, myself, was so insufferable when I got out of college that I still sometimes wake up in a cold sweat, remembering the stupid things I said in arguments with other people in public places. And it wasn’t that I was evil or anything. I just had strong opinions, but not enough experience with the world to test my opinions in reality. Learning how my values work in the real world has been one of the most interesting experiments of my adult life, and if I’m lucky, I will have time to do a lot more learning.

The four women who form the core of Girls are figuring out how their very different world views interact with their very different ambitions. There is the earnest Hannah (Dunham), the conventionally beautiful (and rather conventional) Marnie (Allison Williams), the cute but serious Shoshanna (Zosia Mamet) and the utterly insufferable Jessa (Jemima Kirke), a character I found so repellent that it took me several years to consider whether I hated the actress or maybe was supposed to be that repulsed.

By the final season, which ended last Sunday night, we had a sense that each character had a life in front of her that would not be perfect, not by a long shot, but that would be much more complex than any happily-ever-after could possibly be.

I expect the same will hold true for Lena Dunham. She didn’t create a “perfect” television show, but she did create one that was interesting. She is not a “perfect” public figure, and she often said some incredibly stupid things. She will probably say more. I did. Unlike me, she’s in a position to use her privilege in a way that makes her mistakes more difficult to make in the future.

I don’t know if there will ever be a Girls reunion, although I would imagine that there are those already lobbying for one. I wouldn’t want to see one for a few decades. It would be fun to see them together, maybe at an independent living facility, catching up with each other’s lives and grandchildren, trading tips about how to best be female at this stage of their lives.