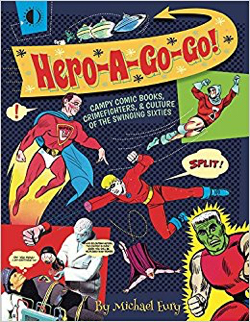 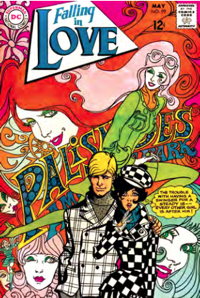 I recently covered a mini-trend of fascinating and well-researched books lovingly that looked back at goofy super-heroes here. Now that we’re on the cusp of the debut of one of these books, Hero-A-Go-Go, it’s time to take a deeper dive. I cornered author Michael Eury and asked all those questions that I’ve been dying to ask him:

Ed Catto: You reminisce about Jill St. John’s role in the debut episode of the 60s Batman TV series. Isn’t this really the start of the Camp Age?

Michael Eury: Well, as I wrote in my introduction: “No, Batman did not create the camp movement of the Sixties. Yet Batman was its zenith, its very poster child. And from my perspective, it was a wonderful way to go-go.” I can’t pinpoint an exact beginning of the Sixties camp age (I doubt there was a single moment, but instead a growth, an evolution)… but as your question suggests, the premiere of Batman was its most visible moment.

EC: You’ve included some wonderful interviews in Hero-A-Go-Go. How did you decide whom to pursue?

ME: I wanted to add some celebrities to the mix for their behind-the-scenes insights, then targeted some folks whose work was fundamental to the Camp Age but whose stories are not as visible as, say, Adam West’s Batman anecdotes.

I loved the album Jan and Dean Meet Batman when I was a kid, and spoke with Dean Torrence for a couple of wonderful hours. Very nice guy and an incredibly frank interview.

I was also determined to give Bob Holiday, the Superman of Broadway, his due, and he was genuinely moved by my interest. Another great interview! Sadly, he passed away while the book was going to press, so he didn’t live to see this, his last interview, in print.

There are a lot of other interviews, including some comics artists, throughout the book. They add a valuable insider’s perspective to my essays. 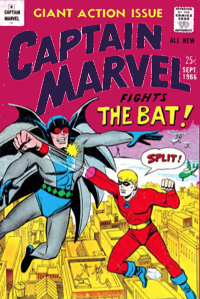 EC: As a kid, I remember being so confused by Dell’s Dracula. Now, I love him and all the Dell monster heroes. What was the deal with these guys?

ME: Dell’s monster-heroes (Dracula, Frankenstein, and Werewolf) became my sleeper favorite from my Hero-A-Go-Go research (which consisted of roughly a year of reading campy comic books and watching tons of Sixties’ cartoons and TV shows – in other words, reliving my childhood).

They were, at heart, a great idea: merge two things kids love, monsters and superheroes, into one concept. Essentially, Dell’s Dracula was Batman-meets-Dracula, the other titles being Superman-meets-Frankenstein and James Bond-meets-the Wolf Man.

Unfortunately, the comics themselves were haphazardly produced at a breakneck pace, and even the writer and artist, D.J. Arneson and Tony Tallarico, shrug off the final results.

EC: Being a marketer, I was especially interested to reach about the licensing deal for Batman Milk. In my hometown (Auburn NY) we always asked mom to get the Hogan-Souhan All Star Milk cartons featuring Superman! Was there a lot Superman and Batman milk out there?

ME: Definitely a lot more Batman than Superman, but both were represented.

The Batman All Star Dairy essay is one of my favorites in the book, not simply because it’s a story from my childhood, but because it tells a tale of the universal small American town.

EC: Your section on super hero paperbacks was a lot of fun. Why do you think there were so many and which one is your favorite?

ME: Remembering that kids were only half of the camp movement – with adults being the other – these paperbacks were an effort to get superheroes into the hands of readers older than the standard comic-book demographic.

My favorite? It’s a tie between the first Signet Batman volume and Bill Adler’s Funniest Fan Letters to Batman.

EC: Archie Comics is experimenting with several reboots of their classic characters, in both comics and on TV. In Hero-A-Go-Go, you discuss some of the 60s Archie reboots. What were they like?

ME: As I note in the book, Archie Comics as a publisher has never been shy about capitalizing on current trends. During the Camp Age, there was an Archie for everyone – the standard teen fare, an Archie for superhero fans (Pureheart the Powerful), an Archie for spy fans (The Man from R.I.V.E.R.D.A.L.E.), and an Archie for Monkees fans (the Archies). Funny how a small community like Riverdale attracted so many supervillains back then…

EC: I recently picked up an old copy of Charlton’s Go-Go (complete with Miss Bikini Luv and some Jim Aparo artwork) and it was bats*t crazy fun. Can you tell us more about that series?

ME: It was a weird but wild book, editor Dick Giordano’s MAD-meets-Tiger Beat hybrid. Charlton was publishing music fan magazines back then and had access to teen heartthrob pinups and such, and those shared pages in Go-Go with parodies of TV shows, superheroes, and fairy tales, in comics form.

Jim Aparo was the break-out star from Go-Go – and who’d have thought he was such an amazing humor cartoonist? His Miss Bikini Luv work was fabulous!

EC: You know I’m a big Wally Wood fan, and in this book, you have fascinating sections on T.H.U.N.D.E.R. Agents, Miracles, Inc. and more. What do you think of those properties and Wood’s 60s contributions?

ME: Well, if anyone could’ve elevated the so-called lowbrow camp movement to a highbrow art form, it was Wally Wood. He was just amazing.

I knew little of Miracles, Inc., Wood’s oddball superhero team spoof, before beginning my research. His first Miracles tale was short but sweet. Too bad he left the strip, as it floundered afterward.

EC: Your animated heroes section is very robust. Any surprises in your research?

ME: There was a lot of material in that section, wasn’t there? What a fantastic lineup of TV programming we had to choose from back then!

Most of the material I write about, I knew from my previous readings and studies, but I was surprised to discover from Ralph Bakshi the behind-the-scenes issues with Krantz Films’ Rocket Robin Hood. Also, before my research I didn’t know that the King Kong cartoon had two movie connections!

EC: Whose vinyl records are best to listen to when reading Hero-A-Go-Go: The Modniks or the Maniaks?

ME: Well, since they were both patterned after the Monkees, I’d say, listen to the source material! Actually, I did – through Hero-A-Go-Go, I developed a deeper appreciation for my two favorite bands from my childhood, the Cowsills and the Monkees. The Monkees, in particular, had a diverse range of music outside of the bubblegum pop hits that everyone remembers, and rediscovering them was a joy. Plus, I got their reunion CD, Good Times, and nearly played it to death!

Hero-A-Go-Go will be released April 19th by Twomorrows Publishing – look for it at your local comic shop or neighborhood bookstore! And remember, they can always order it for you. My bookstore gets books in for me so quickly –oftentimes the next day!

Oh, and by the way, our good pals over at the 13th Dimension are exploring 13 different sections of this book each Saturday too.