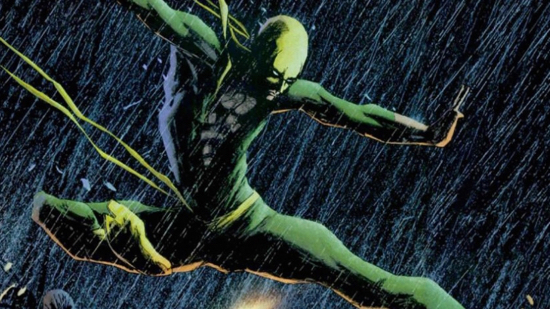 In peril, poor Polly Pearlwhite plunges from the pinnacle… And I, a superhero, really should fly up and save her and so I shall as soon as I change into my hero garb and… But what is this? I don’t seem to have worn the cape and tights under my Brooks Brothers suit and how could I forget such a thing? Well, come to think of it, I didn’t have my morning coffee and I’ve been Mr. Cottonbrain all day and… Never mind. Sorry, Polly.

So there I was – this is me taking now and not the fictitious person in the previous paragraph – and I’m about to reveal that early this morning, at about one, I finished watching the Iron Fist television serial and can report general satisfaction with it. But during the final minutes of superhero action I wondered if the film makers were going to give Mr. Fist a costume. He had one in the comic books where he first came to life and back when I was editing his monthly biography I regarded him as another one of Marvel Comics’s costumed dogooders, in the same area code as Moon Knight, Spider-Man, Daredevil, The Hulk, et cetera: not as popular as some of Marvel’s output, but clearly of the same ilk.

The show I was watching earlier today ended – mild spoiler-alert, one you needn’t pay much attention to – with Mr. Fist and a companion climbing to the top of a mountain and finding… not what they expected but rather things that must certainly have ruined their day and, not incidentally, provided a hook into another story. That, we will probably be seeing soon. Mr. Fist was wearing clothing appropriate to climbing snow-covered peaks, but it was just clothing, not a costume.

Marvel’s last adaptation of one of the company’s characters to television went costumeless too. This was Luke Cage, a.k.a. Power Man, who, in the comics I worked on, was Iron Fist’s partner. Coincidence? Probably. But might it not also be the harbinger of a trend?

The costume trope has been a part of the superhero narratives ever since Jerry Siegel and Joe Shuster introduced it with Superman in 1938. But they didn’t give us the first costumed hero. That honor goes to Lee Falk who began syndicating a newspaper strip titled The Phantom a couple of years before Superman appeared on the cover of Action Comics #1. The Phantom wore a skin-tight costume and a pair of holstered automatics. He lived and operated in the deep jungle, which makes the costume a bit puzzling: it doesn’t seem appropriate. But we won’t be foolish enough to quarrel with success.

Back to Mr. Fist. There’s no reason why action folk have to wear odd suits and a reason or two for them not to. The reasons usually provided are, well… as much excuses as reasons and I don’t completely buy them. It might be that they’ve outlived their time.

Certainly, Iron Fist did just fine in something he could have gotten at a mall.