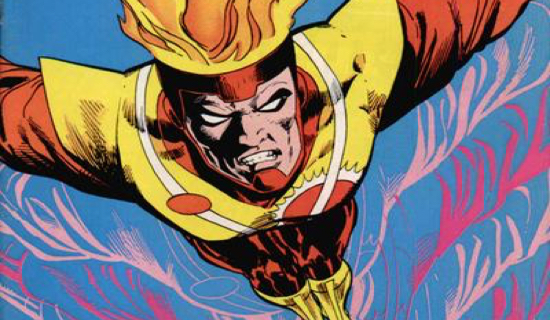 Tomorrow I’m supposed to have what is called a nuclear stress test – checking on the old ticker – during which they introduce a nuclear particle into my blood stream and then will track it. According to comic book physics, this should result in my gaining a super-power or two. So I’ve been considering what power(s) I might get or want.

There’s a spectrum of possibilities. Spider-Man got his powers through radioactivity, as did the Hulk. The Fantastic Four got their powers through a form of radiation. In the back of my mind, I wonder if the radioactive particle might activate some recessive mutant gene or possibly Terrigen mists like the Inhumans to which I may have been unwittingly exposed.

Daredevil got hit by a truck and some radioactive isotope/bar clonked him on the head which obviously gave him his radar sense. The Atom got his powers from White Dwarf Star radiation. Superman’s powers come from the rays (radiation) of a yellow sun, but he loses them under a red sun.

So – what powers would I want? Flight is always a great one but there are problems. For example, why doesn’t Superman have bugs in his teeth? You drive a car down a highway and you’re going to wind up with bugs in the grill and bugs on the windshield. And big airplanes are often having collisions with birds; does Supes do that or does he dodge them? So flying is not as simple or cool as one might imagine.

Enhanced strength? I’d be the perennial bull in the china shop. How much would I destroy by accident? I’d have to get used to it and learn how to modulate it; shaking someone’s hand could cause them major bodily harm.

I’ve always had the theory that super-powers in some way should have a psychological component; the power somebody manifests should be tied in to who they are. So what powers would work for me?

I tend to be more cerebral than physical, so I think I would tilt more to the Professor X end of the scale. Mind powers. Or like Deadman, I’d have the ability to inhabit other people and take over their bodies and live their lives for a while. It’s sort of what I do as a writer; I go into other lives.

Eh, then you also have Dr. Sam Beckett on Quantum Leap. I thought he was kind of creepy. He’d “jump” into other people’s lives and be them for a while and then, when he leapt out, the real person would come back, aware that they had been possessed and dispossessed at the same time and they’d be stuck living with the changes Sam Beckett had made in their lives.

Green Lantern would be up my alley; manifesting whatever I can imagine through sheer force of will. That, too, is what I do as a writer. But that falls outside the parameters of the concept – it’s not radioactivity that gives GL his powers but the ring. Same thing with Batman; no radioactivity involved in his creation. Unless we want to suggest Bruce was bitten by a radioactive bat when he first fell into the bat cave as a boy. Hmmmmm.

Of course, I could also wind up with less useful powers such as being able to sniff out chocolate within a mile. Or with a gesture make meatballs and sauce fly out of my fingers. With my luck, that would be more likely.

Well, we’ll just have to wait and see. If I get something, I’ll let you know next week. Unless, of course, I need to preserve my secret identity. If you hear nothing further from me on the subject, you’ll know why.

As the creator of so many great super-heroes would say – Excelsior!