Mindy Newell: What Is Human?

As Martha Thomases said last week, although in an entirely different context – Too Much! Too Much!

Radiolab, which airs on NPR – check your local station – is a show that features issues both philosophical and scientific. In its 15th year, I was listening on Saturday as the hosts, Jay Abrumrad and Robert Kulwich, discussed a case brought to their attention by reporter Ike Siskandarajah. It was called “Mutant Rights.”

Two international tariff lawyers, Sherry Singer and Indie Singh, discovered that the legal classification of “doll” were taxed at a higher rate – 12% – than the legal classification of “toy,” at 6.8%. This was because dolls are considered “human,” and toys, such as figures of robots and demons and vampires and monsters, are not. A very strange idea to begin with, but what really piqued their interest was that Ms. Singer and Ms. Singh happened to include in their client list none other than Marvel Entertainment, also known – around here, at least – as Marvel Comics. And Marvel was importing its action figures as “dolls.”

This meant that Ms. Singer and Ms. Singh set out to save $$$ for their client by using the X-Men action figures to claim that these representations of the mutant superheroes were not human, and therefore should be taxed at the same lower rate as toys. To help illustrate their point, the two lawyers collected between 60 and 80 samples of action figures, and especially the mutant X-Men. 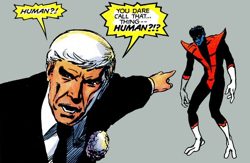 Bryan Singer, oft-time director and executive producer of the X-Men movie and television franchise, discussed the history of the X-Men with Ike and the two lawyers, reflecting on the history of the X-Men, and how, throughout their history, they have represented those who are different from or outside the society in which they live, whether by skin color or sexual preference or religion or place of birth or, well, whatever.

But the crazy thing is, the court case, which lasted over ten years, became to be about what it means to be human (as did the segment). And the final verdict? All Marvel actions figures, whether representing mutants or not, are now classified as “non-human” – therefore, toys.

But does that ruling apply to all the action figures from all the companies from all the world? I mean, not all action figures are created equal. Kal-El is Kryptonian, so that’s easy, and Diana is either made from clay or half-goddess, depending on which origin you prefer (YMMV), so that’s easy, too. Buffy’s powers come from the demon darkness, Willow and Tara are witches, Oz is a werewolf, Angel and Spike are vampires. But what about Giles? And Xander? And what about Bruce Wayne, and Dick Grayson, who may classify as superheroes, but are totally and completely human?

I’m guessing that, having set a precedent with this ruling, imported action figures, if they are connected to comics or other popular media specializing in science fiction and fantasy, are paying the lower 6.8% import tariff. But…

This is a case for ComicMix’s resident commenting attorney.

Up, up, and away, SuperBob!