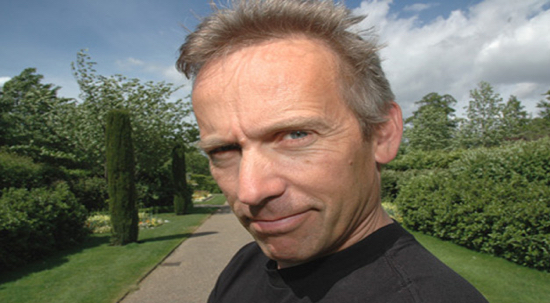 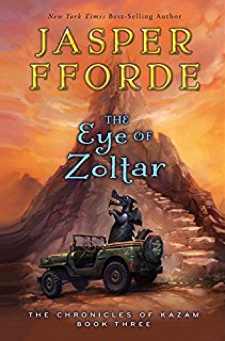 I’m hesitant to outright recommend almost anything – books, movies, music, TV shows, and so on. Invariably someone acts on my recommendation, doesn’t like it, and blames me for the waste of their time and/or money. “It sucks, Ostrander”, they say, “and so do you!”

However, from time to time I encounter something I truly enjoy so I’ll share my enjoyment and you can decide if it’s something you want to try.

I’ve recently read the three novels in The Chronicles of Kazam (and really wish the fourth and final volume was available right now) by Jasper Fforde and had a wonderful time with them. I’ve enjoyed Mr. Fforde before with his Thursday Next series and the Nursery Crimes novels but the Chronicles of Kazam had eluded me until brought to my attention by my very good friend, Jim Murdoch (Hi Jim!). The bit of irony is that I introduced him to Jasper Fforde in the first place.

A word or two about Mr. Fforde. He is very British and, not surprisingly, a bit mad. The author I can think that is most like him is P.G. Wodehouse, the creator of the butler Jeeves and his dim employer, Bertie Wooster, except that Fforde works in very different genres. There is a love of wordplay, of whimsy, of puns with very tight plotting and keenly drawn characters. In fact, he won the Wodehouse prize for comic fiction in 2004 for the third book in his Thursday Next series, The Well of Lost Plots. There also seems to me to be a Monty Python-esque sensibility to his work.

The Chronicles of Kazam are technically Young Adult novels dealing with magic in an alternative dimension where the United Kingdom (U.K.) is known as the UnUnited Kingdom (UnU.K.) which is made up of various kingdoms, empires, duchies, and so on. Magic is not as common or strong as it once was and is used most often for clearing drains and re-wiring houses and that sort of thing. A sorcerer with a threadbare flying carpet is most likely to be delivering pizzas. In the Kingdom of Snodd, where the stories largely take place, magic is very tightly regulated and forms must be filled out every time a spell is cast or the spell-caster can be burned at the stake.

The novels focus on Kazam, an employment agency for a group of seedy sorcerers with different abilities and power levels. It runs out of a former hotel now dubbed Zambini Towers and is supposedly run by the Great Zambini who, unfortunately, is missing. A spell went wrong and he keeps popping in and out of reality. In his place, Kazam is managed by Jennifer Strange, a 15-year old foundling (orphan) from the orphanage run by the Sisters of the Lobster. Jennifer, who narrates the books, is indentured to the agency until her 18th birthday and is herself not a magic user but she is gifted with smarts, moxie, and courage and is fully capable of running the business in the absence of the Great Zambini.

Not all is whimsy and fun in the books. Events happen that have real consequences and characters die, including ones we’ve come to like very much.

Fforde appeals to me a great deal but I can see he might not be for everyone. If what I’ve written about it sounds all a bit to twee for your tastes, best to avoid them and all of Fforde’s work. However, if they sound like fun to you, by all means give them a try. The first in The Chronicles of Kazam in The Last Dragonslayer and it’s available in paperback.

After he finishes with Kazam, what I would really like to see is Fforde tackle the superhero genre. I think what he could do with the capes and tights crowd could give me almost terminal giggles.