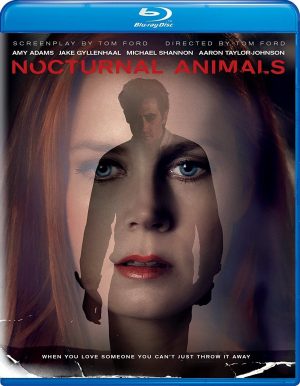 The line between reality and fiction is often blurred by the author, who plumbs his or her life experiences to work through anger, grief, remorse, love, etc., pouring those experiences into thinly veiled versions of themselves. But, to use those characters as a blunt instrument in an act of revenge is something different.

Susan Morrow (Amy Adams) was once married to Edward Sheffield (Jake Gyllenhaal), a budding novelist. They became lovers during grad school, married, and then parted as she lost faith in his ability and chances for success. Instead, she had an affair with Hutton Morrow (Armie Hammer), eventually marrying him and becoming a wealthy art gallery owner in Los Angeles. However, now time has not been kind to the marriage and they are rapidly drifting apart leaving Morrow alone and lost in a world of opulence.

Then, a manuscript for a forthcoming novel arrives from Edward, dedicated to Susan. She begins reading it and loses herself in his beautifully written world and its’ tragic inhabitants. We then are taken into the novel and meet Tony Hastings (Gyllenhaal), his wife Laura (Isla Fisher), and their teen daughter India (Ellie Bamber). Driving along the Texas highways, they are set upon by a gang led by Ray Marcus (Aaron Taylor-Johnson). After terrorizing the three Hastings, the women are spirited off to be raped and murdered, leaving Tony thoroughly abandoned.

With the help of Detective Bobby Andes (Shannon), the hunt for justice and vengeance begins.

The film cuts between real world flashbacks and contemporary settings with the novel’s narrative taking up the largest portion of the film. It’s not hard to follow and it does nicely reveal Susan and Edward’s past, explaining why he wrote this story and then, in the film’s final minutes, we understand his act of revenge.

It’s chilling and terrifying at times, gorgeously shot at other times, and it’s telling that the most riveting performances come during the novel sections. Adams’ Susan is cold, frozen with uncertainty and regret, certain her second marriage is crashing.

With all that said, its remote tone keeps audiences from getting fully invested in the characters (we know the more interesting ones aren’t real) which may be why the movie failed to find its audience.

There’s a chance now with the film out on Blu-ray from Universal Home Entertainment. The 2.40:1 high def transfer is crisp so you see through the shadows and experience the gorgeous Texas settings. The DTS-HD Master Audio is a superb companion.

The disc’s scant extra is a three-part The Making of Nocturnal Animals: Building the Story, the Look of Nocturnal Animals, and The Filmmaker’s Eye: Tom Ford. These provide a thorough examination of the adaptation process and bringing the themes, if not the characters, to full life.