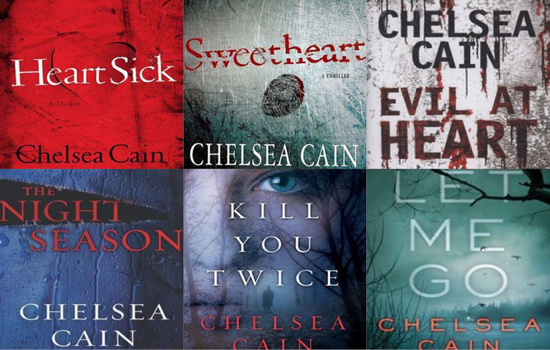 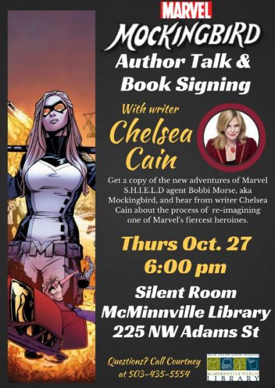 A while back, everyone I knew was raving about how fantastic Mockingbird was ever since Chelsea Cain started to write it. Then she got chased off Twitter (some say because of this), and I felt I needed to check it out.

Women writers (and all women) (and all people of good conscience) need to support each other in the face of harassment and threats. Buying a book is literally the least I could do at the time.

Apparently so did everybody else, because I couldn’t find the first Mockingbird collection anywhere. It was back-ordered on Amazon, so, to be supportive, I downloaded a prose novel of hers for my Kindle.

Since I didn’t know anything about her or her novels, I chose the first one in her Archie Sheridan series. Sheridan is a cop in Portland, Oregon, who led a serial killer task force for ten years. Then he was kidnapped by the one killer who had escaped him, tortured for weeks and then set free, only to take a two-year leave of absence to recover. The series starts when he goes back on the job.

The killer who kidnapped Sheridan is a woman, Gretchen Lowell. Before she kidnapped him, she posed as a psychologist consulting for the task force… and they had an affair. He remains obsessed with her, even as he remains physically ill from the aftermath of the torture. His time with her not only destroyed his body but his marriage and his relationships with his children as well.

Still, I couldn’t put the book down. As soon as I finished one, I began the next.

Most of the credit for my interest can be given to the character of Susan Ward, a young, hip, punkette reporter who trails after Archie in search of a story. Unlike Gretchen, Susan sometimes gets muck on her clothes, can’t walk in heels, and says the wrong things that get her fired. It is her perspective on Archie and Gretchen that makes the books so entertaining.

Throughout the series we watch Archie as he blunders into situations that leave him vulnerable to Gretchen’s attacks, only to solve the crime at (often) the last minute and save Oregonian lives. Sometimes it seems as if we are building towards a Susan/Archie romance. Sometimes we think he’ll get back with his wife.

I don’t find these books as interesting as Ridley Pearson’s series about Lou Boldt and Daphne Matthews. In some ways, it’s not a fair comparison because Pearson’s books are procedurals and not thrillers (although there is, inevitably, a lot of overlap). There’s way less emphasis on sex, and a lot more about how police departments work.

I’m not saying Cain didn’t do her homework. Clearly, she did. However, it’s not what is emphasized in her stories.

For me, the obsessions are more interesting than the eroticism. A hard-boiled cop, one who has walked these mean streets, seen all kinds of horror, who just wants his old life back, is interesting to watch when he throws it all away. Over the six books in the series, he has chance after chance, and he throws away multiple opportunities for multiple futures.

Will you like these books? I don’t know your life. However, if you have a rainy Saturday, or a long flight ahead of you, you could do worse than try. Like potato chips, I bet you can’t read just one.