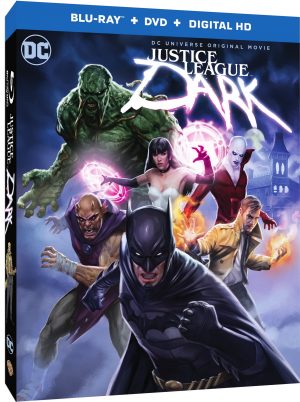 The concept of the DC Comics’ mystical characters gathering to combat occult evil always sounds good but of course, execution is everything. When it was done sparingly, as in Swamp Thing #50, it was quite effective. As an ongoing series, it proved tough to manage since each player was plucked from a title that had a fairly unique look and feel.

That said, the newly released animated Justice League Dark film is incredibly entertaining and certainly a cut above the last half-dozen releases. From a story by JLD writer J.M. DeMatteis and Ernie Altbacker, Altbacker’s script shifts the super-heroic DC Universe to supernatural threats that Superman (Jerry O’Connell), Wonder Woman (Rosario Dawson), Green Lantern (Roger Cross) and the others are less equipped to handle. Altbacker is no stranger to heroes and magicians with credits including Spooksville and Green Lantern: The Animated Series and he does a fine job weaving the various threads.

A series of disconnected people around America and then the world think they are seeing demons and a puzzled JLA feels a bit out of their depths. Batman (Jason O’Mara), the logical character to bridge the worlds, is at first skeptical until Deadman (Nicholas Turturro) arrives to possess him and insist he seek out John Constantine (Matt Ryan). To find the Brit, he reconnects with his old friend Zatanna (Camilla Luddington) and from there, the path takes them to Constantine, living in the House of Mystery. Along the way, they collect Jason Blood (Ray Chase), which means we get plenty of doggerel from his counterpart Etrigan the Demon,

Thankfully, the story pauses now and then to give us brief origins which will certainly help introduce these lesser known players to a wider audience.

To locate the cause of the supernatural infestation, Constantine once again uses and abuses friends in trademark fashion. There’s a nice exchange when he must summon Swamp Thing (Roger Cross) for help. 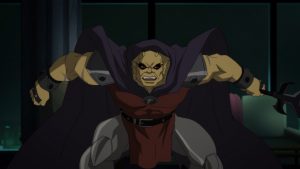 The DC Animated Universe differs sharply from the DC Universe and Cinematic Universe not just in how characters look but also their back stories. The biggest change here is Black Orchid (Colleen Villard), now a spirit protecting the House of Mystery’s artifacts. There’s another substantive change at the end which I won’t mention.

Amped up beyond anything we’ve seen in the comics is Felix Faust (Enrico Colantoni), who seems super-charged as he magically duels the entire team. Later we get an almost unrecognizable Doctor Destiny, here a centuries-old being called only Destiny (Alfred Molina).

The movie moves along at a lovely clip and director Jay Oliva excels with the magic battles, refreshed after growing a tad tiresome of the superhero fights. He brings a nice moody look and feel to the entire production which is most welcome.

Vocally, the cast is strong, of course, and the banter between Luddington (Grey’s Anatomy) and Ryan (live-action’s Constantine) is a highlight. 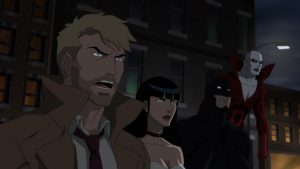 The two-disc gift set comes with a Constantine figurine. Special features on the Blu-ray include an enticing look at this spring’s Teen Titans: The Judas Contract, also from Altbacker. There’s a very nice featurette on The Story of Swamp Thing, featuring cocreator Len Wein and artist Kelley Jones address the creature’s origins and the stunning art from cocreator Bernie Wrightson. There are a series of short, almost pointless, Did You Know?s including Constantine origin, Color of Magic, Black Orchid, and Deadman. A 2016 NY Comic Con Panel is included. Finally, From the DC Vault offers up Batman: The Brave and the Bold, “Dawn of the Dead Man!” and Batman: The Brave and the Bold, “Trials of the Demon!”