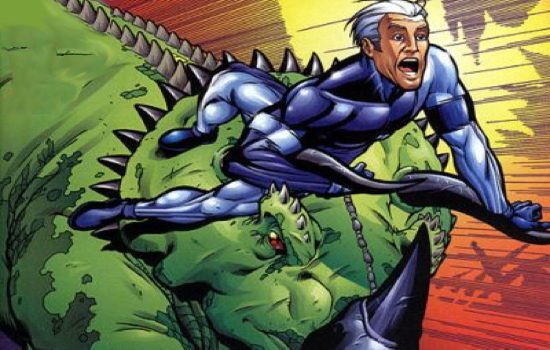 This coming week, Marvel is issuing the second part of my work on Heroes For Hire and, as I did when the first volume came out, I thought I’d talk a little bit about it and why I made some choices that I did and what I was thinking when I created the stories.

Background info: my run on H4H began in 1997 and ran for 19 issues. The team was a corporate entity, hiring out groups of superheroes for various missions. Luke Cage and Iron Fist were the core, with the Original Human Torch, Jim Hammond, running the business. Lots of characters cycled in and out, the most constant being White Tiger, Ant-Man (Scott Lang), Black Knight and Thena of the Eternals. We also had lots of guest stars such as Hercules, Wolverine, Shang-Chi, She-Hulk and Deadpool who, not surprisingly, was featured on the cover.

Deadpool is probably one of the main reasons Marvel is gathering this collection right now, along with the fact that Luke Cage and Iron Fist both either have had or will have a series on Netflix that will lead into the Defenders miniseries. And, maybe, the fact that I wrote Suicide Squad and that movie is now out on DVD, Blu-Ray, and so on. Ah, name recognition!

Often the guest stars would appear depending on availability and also on with whom I wanted to play. That accounts a lot for Deadpool’s appearance. ‘Pool is a lot of fun to write; he has a deep streak of whacky and I like whacky.

In fact, the entire series has a deep streak of whacky as best exhibited by the narrator. The voice of the narrator started normally but rapidly developed into sort of a character of its own. I was influenced by Stan Lee’s way of talking to the reader, calling them “effendi” and promising to get them caught up when the story started in the middle of a fight scene (which is one of the best ways ever to start a comic). My narrator would complain about not being told what’s going on and once panicked when there was a crash and it appeared all the heroes were dead. She-Hulk, who was also a lawyer, later broke the fourth wall and fired the narrator. We had a new, normal narrator after that; even the font changed to establish this was not the “same” narrator. 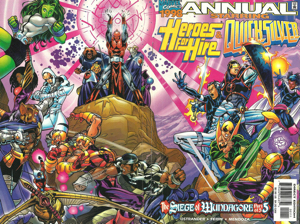 I have no idea what readers thought but, hey, I was amusing myself.

Smack dab in the middle of this we had a five-part crossover with the Quicksilver book that I was writing along with Joe Edkin. That year, Marvel was doing “paired” Annuals and, since I was involved with both H4H and Quicksilver, they got paired. Joe and I had inherited a storyline involving the High Evolutionary, the Knights of Wundagore, Exodus and the Acolytes, and ultimately Man-Wolf. In retrospect, Joe and I probably should have wound up that storyline sooner than we did and gone on to our own ideas. We hoped that linking the Quicksilver book with H4H would create an event and would help increase the readership of Quicksilver.

It didn’t work out that way. Quicksilver actually got canceled and I think we hurt H4H in the process. There were just too many characters and plenty of switching sides. Maybe we should have had a scorecard.

The pencilers on the series were generally top notch. Pachalis (Pascual) Ferry was our regular penciler and he’s terrific. Very flowing artwork but with a sense of energy and excitement akin to Jack Kirby. Excellent storyteller, too.

My other favorite penciler remains Mary Mitchell for a lot of good reasons. I first encountered Mary at a Chicago Con; incredible storytelling skills, a great sense of architecture and place, and even minor characters seemed to have a real life. They all had their own stories and we could have followed those but we were following these other characters instead. I helped her get some of her first jobs and she eventually came to live with Kim Yale and me. She stayed during Kim’s fight with breast cancer and stayed after her death. Much later, she and I became a couple and still are but at the time of her doing the story in this volume, we were just good friends.

The story was a solo adventure of the Black Knight who was a favorite character of mine and who I had brought into the group.

Another favorite character that I brought into the comic was Mrs. Arbogast, the older and sometimes acerbic secretary who had worked for Tony Stark. She has a dry disdain similar to Alfred in the Batman movies.

We had lost some readership but it was growing again but this was the Ron Pearlman era when the company was owned and operated by bunch of people who clearly didn’t know what they were doing. One underling decided he would curry favor by saving money by canceling a bunch of books – including H4H. We didn’t really warrant it. Said underling then left the company a short time later. Such is life.

I’m proud of my work on H4H. My approach was consciously different from my work at DC; a bit looser, a bit more in what I considered to be “the Marvel manner.” A plot might not complete in one issue but end at the start of the next issue and we would then plunge into the next story. Sometimes the pace was a bit breathless and that was all by design. I wanted H4H to be fun and the best way to make that happen was to have fun myself. I did and I think it shows. If you take a look, I think you’ll have fun, too.