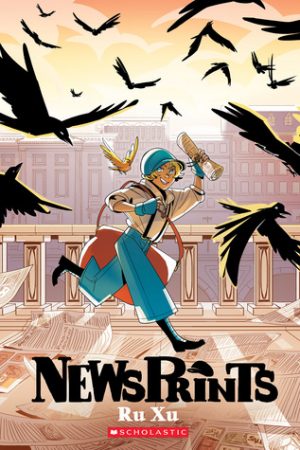 A world eerily familiar to our own but not, a time of war between two neighboring nations, and a girl masquerading as a boy because she loves selling newspapers. Toss in some steampunk, some science fiction, some gender roles and identity issues, stir vigorously and you have Newsprints a refreshingly original graphic novel from Ru Xu.

Best known for her webcomic Saint for Rent (http://www.saintforrent.com/comic/the-cloverhouse-inn), the SCAD graduate moves from serialized storytelling to a done-in-one adventure that breezily moves along. Lavender Blue has come to work at the Bugle, living with her fellow newsies and keeping her sex a secret because, for some inexplicable reason, girls can’t sell newspapers.

On her website, Xu states, “I’m really excited about the first book because it explores a lot of eye-opening feelings I had toward fitting in while growing up, gender identity, and dealing with the expectations of adults. I got to draw a backdrop inspired by the early 20th century and dieselpunk,”

Adolescent Blue is content for now, although she is aware her body will betray her soon enough. She winds up meeting Jack, an inventor of some sort, working in secret. They become friends and she apprentices herself to him. As a result, he brings her with him on his travels which leads to her accidental meeting with the muffled figure who only names himself Crow. She warms to the odd figure and they spend time together but slowly, we learn, that Crow is a robot, a product of Jack’s intelligence and early use of Artificial Intelligence. He was a prototype for a war machine but he chose to leave his country Grimmaea for refuge in Nautilene.

There are chases, secrets learned, relationships altered, and the like before things reach its anticipated climax and resolution. Xu tackles lots of issues and themes here and for me one of keenest was her sense of betrayal when she comes to realize the truth is the first casualty of war. Gender politics comes into play with Blue but also with an adult, Jill, who comes to play a pivotal role.

It’s 1924 and there are phrases like AI that get used so this alternate reality isn’t totally divorced from our world but the worldbuilding is sketchy at best so we don’t understand why things are the way they are or what is at stake during the prolonged war. Blue, Jack, and Crow are the only characters to move beyond two dimensions which is shame since the others, Hector, the Mayor, and Jill among them, who could use some depth and complexity.

Visually, Xu’s work is minimalist with a strong sense of design. Still, the broad strokes and spare use of line means expressions can lack subtlety when called for. Sometimes figures are moving in a panel and you can’t quite tell what is happening. Xu fills the pages and paces things nicely, sparing with splash pages or complicated designs. Xu’s color, done with her brother Eric and Liz Fleming, does a nice job with a limited palette. In Saint for Rent, she has been very disciplined with color because she embeds GIFs to enhance the webcomic and the colors have to be harmonious. Here, she works with broader colors without getting garish, helping give us a sense this is not our world.

The 8-12 year olds this is aimed at will find plenty to like and hopefully read some things that gets to them to think a bit. This nice debut work shows plenty of promise for the future.