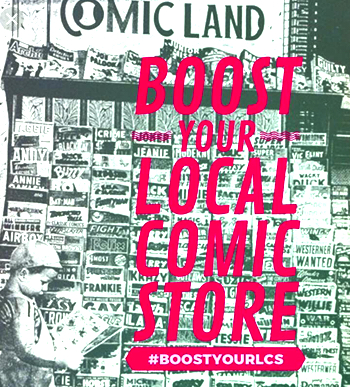 The world is changing quickly, but I think everyone always says that. Back in high school, my fantastic Latin teacher, Mr. Guido, had us read writings of Romans from 2 AD or something. The gist of it was “the kids these days… they have no respect.” Sounds like what my parents said about my generation (they were right) or what adults say now about the younger generation.

But one part of the world is changing rapidly, and that’s the world of retail. On one hand the stores I ventured into this Yuletide Season seemed really crowded. My wife, who works in retail, was working hard as well. And so my parochial experiences didn’t really prepare me for the dire national news about retail chains; specifically, that 100 Macy’s, 108 K-Marts and 42 Sears stores would be closing this year.

That’s a huge number. Having moved back to a smaller community from the Metro NYC area, I can see how a department store closing like this can fundamentally impact a small town.

When we focus the retail lens on Geek Culture, quite a few comics and cards stores ended up struggling during the last few months of 2016. 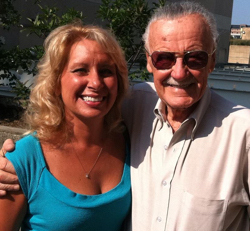 You’d think that with big movie blockbusters, TV hits, strong merchandising, card game growth and some of the most creative comics being published in years, comic shop retailers would have it made. But they don’t. It’s still a tough business. There are many reasons and they all are passionately discussed. To say that Marvel’s recent comic product has been underperforming is simplistic, but there’s no denying that it’s a piece of the puzzle.

Christy Blanch is an owner of Aw Yeah Comics store in Muncie, Indiana. But she wears a lot of hats. She’s also a comics scholar, an educator, a columnist at the 13th Dimension and a comics writer. She shared her insights on it all.

“I am not really sure why comic shops are having such a tough time right now. It should be the opposite – we should be busier than ever,” said Blanch. “Maybe people don’t want to read about the characters they can see on the television and movie screens. I just don’t know because besides superheroes there are so many amazing books out right now. It could be that other places are selling comics or Amazon is so easy. But for me, the experience of comics is one that involves people. Checking out what’s new, talking to other people about what they are reading – it’s the touch and the smell and the visuals that get me. Comics shops are cultural touchstones – I believe that.” 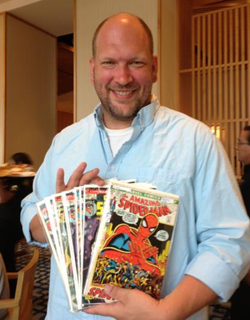 And as comic shops are cultural touchstones, recent pop culture events spark conversations. “When Carrie Fisher passed, so many people came into the store just to mourn with us. It moved me,” continued Blanch. “People thanked us for being there. That’s why I do what I do. That’s why I don’t plan on going anywhere. As Commander Peter Quincy Taggart said in GalaxyQuest, “Never Give Up. Never Surrender.”

Given these retail realities, I was especially impressed with Ross Richie’s recent Boost Your Local Comic Store campaign. Ross is the entrepreneurial CEO of Boom! Studios. He takes his job seriously and he takes the industry seriously, but he never takes himself too seriously. He’s a big, loud, smiling guy with both vision and a laugh that are both infectious.

Ross Richie must have had an epiphany (right before the liturgical Epiphany) and promptly sat down at his laptop and recorded an upbeat, call-to-action video. It’s not slick. It’s not overly produced. It doesn’t’ look like the executive team at Boom! Studios spent days and days planning it. It does look like one guy took the time be creative and issue a call to arms. The effort is called Boost Your Local Comic Store.

Via social media, it’s easy to see that this idea has caught on. Fans and collectors have been posting their additional purchases and shout outs to local stores. 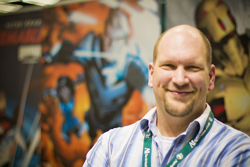 Sparked by Richie, I visited two local comic shops last night: Larger than Life and Play the Game, Read the Story. During these visits, I bought a couple of comics for two co-workers: A Valiant Comic for a lapsed Valiant reader and Hawkeye #1 for a mom to give to her daughter, who likes archery. Gee, it sure felt good.

“I’m not sure how comic shops will survive but I know we have to survive, for the reasons I said above. Plus I’m not letting my kids live in a world without comic shops. They are the happiest place on earth. I love them,” added Blanch. “All I know is that I will do everything in my power to help comics shops, not just mine, but all of them, survive and hopefully flourish.”