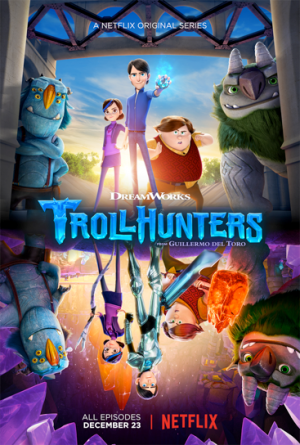 In celebration of DreamWorks Trollhunters, which premiered on Netflix on Friday, December 23rd, DreamWorks Animation Television and Netflix have released an out-of-this-world mash up featuring elements of the wildly-popular Stranger Things! Trollhunters took fans by storm when it premiered all 26 episodes, a first for a Netflix original. Not only were fans ecstatic but critical acclaim has soared since the premiere putting Trollhunters at 93% on Rotten Tomatoes! See your favorite characters back in action in the video below!

From the limitless imagination of acclaimed filmmaker Guillermo del Toro comes a tale of two worlds set to collide in the epic saga DreamWorks Trollhunters. When ordinary teenager Jim Lake Jr. stumbles upon a mystical amulet on his way to school one morning, he inadvertently discovers an extraordinary secret civilization of mighty trolls beneath his small town of Arcadia. Suddenly destined to play a crucial role in an ancient battle of good and evil, Jim is determined to save the world – right after gym class. A must-see viewing event for the entire family, DreamWorks Trollhunters will bring viewers of all ages around the globe into the rich and creative world of this all-new Netflix original series, premiering worldwide December 23, 2016.