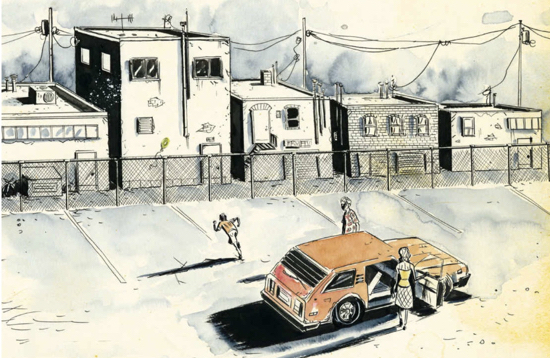 A new year is, metaphorically, a blank slate.

So is my brain, at least as far as this column is concerned. Usually, when I am faced with no new ideas I travel the Internet, looking to see what other people in comics are talking about. Usually, this works.

Unfortunately, a lot of media doesn’t publish much new in the week between Christmas and New Year. Journalists write things in advance (this is why there are so many “Best of” features) so they can take time off to celebrate holidays with their families.

Don’t they know some of us might get bored?

Instead, I found some sad lists and happy lists, but I didn’t find a lot of news.

I have, however, found a new comic series I love, not from the Internet, but from my friendly neighborhood comic book store. As you might remember, Constant Reader, I try to buy at least a few books with which I’m unfamiliar on Wednesdays, when I shop for my superhero fix. I try to challenge my assumptions about what I will and will not like. This means that I sometimes have to try something that doesn’t fit my preconceptions about what an entertaining book might be.

This was the case with A.D.: After Death. Although it is written and drawn by Scott Snyder and Jeff Lemire, two creators whose work I’ve enjoyed, it didn’t look at all like something I would like. There was a lot of text, and the art, while beautiful, did not seem exactly action-packed. Still, the premise (there is no more death) sounded enough like one of my favorite books that I figured I could risk one issue.

The second issue just came out. I can’t wait for the third. If I tell you details of the story, I will miss the point. This is moody and sweet and cynical all at the same time. It goes very well with the gray, rainy winter’s day I’m having as I write this.

And because I really really really dislike gray, rainy winter gloom, I would like to share this from my fellow Buckeye, Tony Isabella. He made a list of things that made him happy last month, and the last one was this: “DC and Marvel Comics. They don’t always get it right, but they keep trying and there’s no denying the big hearts of the people who work at those companies.”

We forget that, sometimes.

Decades ago, at an American Booksellers Association convention, I saw Frank Capra interviewed. Someone asked him what was the worst movie he had ever seen. He said (this is not an exact quote), “I never see bad movies. No one sets out to make a bad movie. When I’m watching something that doesn’t work, I try to see the film they wanted to make.”

We sometimes forget that this is true of comics, too. There are lots of comics I don’t like. There are lots of creators trying to tell stories that don’t interest me, or that have a worldview with which I disagree. And that’s fine. No one can make me enjoy something against my will.

What is not fine is to ascribe evil motives to people whose work I don’t like. I need to remember that they are trying to do the best they can to entertain and, maybe, if they’re lucky, illuminate their readers.