Dennis O’Neil: Let There Be White! 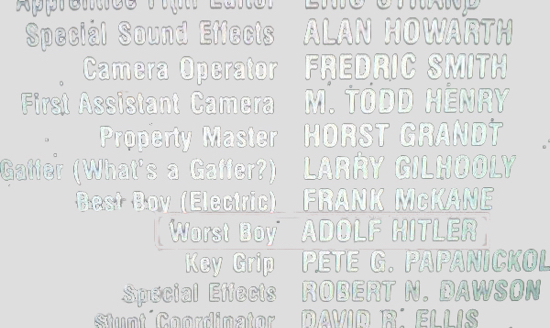 All right now, settle down. Here it is, already the new year and we haven’t even started yet. Started what? That’s just about the kind of question I’d expect from you, mister smarty pants!

We can begin with a gripe, follow with a premature digression and then maybe segue into a topic. Ready for the gripe? Here goes: Geez, a lot of stuff sucks!

But let me tell you about my early days in the writing dodge. When I was groping through the universe, certain of very little, a person or persons whose identity I’ve forgotten told me that clarity was of high importance. Or maybe even crucial. I believed him/her/them and conducted my professional life accordingly, and it seemed to me that the perpetrators of the novels and comic books and films and plays and short stories I was absorbing mostly did the same. (Poems? Maybe not so much. That Ezra Pound can be pretty rough going.) Murkiness was, by and large, not considered a virtue.

But murkiness – lack of clarity – comes in diverse forms. There’s plain old bad sentences and bad plotting and bad acting and unfocused photography and bad editing and inconsistency and showing off at the audience’s expense – for example, sticking in obscure allusions or foreign phrases. And let’s not forget the obvious, bad printing. We’ll end our incomplete catalogue with this: not giving the audience what it needs to understand the action.

Let’s glance, sideways, at some items that really scorch my grits.

Credits that don’t stop running until the show’s a quarter over. Okay, maybe that one’s more mine than yours. I want the damn things shown and then I want to forget about them instead of perching on the edge of my seat waiting to find out who directed the thing

The assumption on the part of the creative folk that everyone in the audience knows the backstory and the characters as well as they do and so that info doesn’t need to be established on later appearances. (A novelist friend once said that every important element of a novel should be established three times in three different contexts. Sound advice. I wish I followed it.) This is especially pertinent these days when here’s a lot of long-form drama happening on television. And by the way: the sins I’ve just mentioned aren’t are seldom committed by the creators of these shows, though maybe they could work on the credits a bit.)

Okay, does that end the griping? Not likely. But it does end the griping for now. Stay braced for further bitchery in the future. We can assume there will be some.