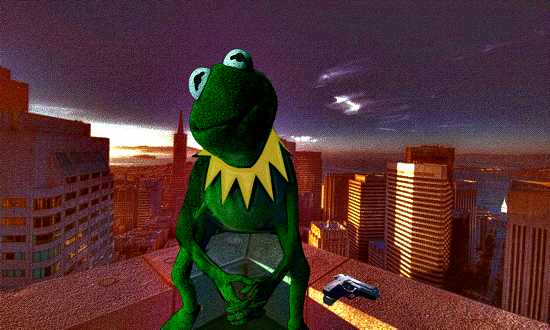 It’s the same voice thought that … you’re standing at a precipice and you look down, there’s a voice, and it’s a little quiet voice that goes, ‘Jump…’” • Robin Williams

Last week on Bleeding Cool someone posted a one-word comment meant as a commentary on my depression.

I couple of years back I almost did.

I put a loaded gun to my head and pulled the trigger. There was no shell in the chamber as life, not luck, would have it. Life would have it before I cocked the slide I answered a phone call. A dear friend could tell the pain I was in made me promise to “stay here.”

On my twenty-fifth birthday, a gun was put to my forehead. When my would-be murderer pulled the trigger, the gun jammed.

There’s a big difference between being saved and being stopped.

I didn’t then, nor do I now, want to die. I just wanted the pain to go away.

I write about my depression for the same reason Wayne Brady and Robin Williams and so many others talk about their depression because it may help someone else deal and help us cope.

Both Wayne and I are still fighting the good fight victories and setbacks along the way are part of the conflict we both know that. Robin lost his battle on August 11, 2014.

He spoke about his depression yet was likewise stricken by dementia with Lewy bodies, a type of dementia that gets much worse over time. I can’t imagine living with that kind of hell.

It pains me to think Robin endured it for as long as he did.

Yes, this is a pop culture website, and there’s an argument to be made my sort of personal reflection does not belong here. On the other hand, I write editorials and opinion columns and It’s because of my opinion, so many of you have found an easy target to voice your opinion.

Unless someone totally mispresents my point or is rude just for the sake of being rude, I take time responding to even the harshest of my critics, and I do so with respect.

In return, I mostly get people trying to school me on my swagger.

Telling a depressed person “jump” and isn’t something you screw around with those who do play with fire. If all you want when you visit sites like Bleeding Cool, ComicMix or any pop culture website is to discuss comics movies or whatever there is nothing at all wrong with that.

I get that. More over I’m not interested in a “very special” episode of the Muppets. I have zero interest in Kermit facing his battle with depression, grabbing a gun high, and tailing it up to the roof of 30 Rock intending to blow his brains out. So, yes, I get that.

If I did end up watching I doubt I’m posting on the Muppet website how I wanted to see Kermit shoot himself.

However, making such a comment while pretending you’re just scoring points in the hate Michael Davis game is cruel heartless uncalled for and can be dangerous.

I could care less about me, My focus has always been on young people.

Mental illness is still a big taboo in the African American community.

What happens if some black 15-year-old girl suffering from severe depression posted a reply in support of my struggle and got a “jump?” As is often the case what happens is she was subject to the troll pile on mob attack? Most likely nothing happens.

This, however, did happen the mother of such a young lady sent her daughters post to me directly. Having read some BC comments, she was smart enough to think better of having her daughter post at Bleeding Cool.

Say what you will about anything I write – even my depression if you’re sick of hearing about it. I get that; I get all of that. But for god’s sake have some regard for those who may read such as an act of cruelty directed toward them and on a bad day that’s all it takes.

If you don’t like what I write, don’t read it. Shit, I can’t stand fruit cake so why the hell would I ask for a slice, hate it even more, then ask for seconds?

If you’re of such character that you feel ok posting that type of darkness over a silly story about Lois Lane, I’d rather you take your business elsewhere. If this community continues to support this sort of stuff, I’ll go elsewhere.

It’s not worth it.

I didn’t out that person and have no idea if the comment is still up. More than likely was meant to be funny and not hurtful. If there, I’ll ask please that no hurtful comments or hateful rhetoric be directed at him or her. I reacted last week without thinking that the writer may be young, despondent or both.

Thanks, Sandy. I loved the note, enjoy the books.