There is a weight and heaviness to being Jason Bourne, nee David Webb, given that your life is constantly being manipulated and/or endangered. Trust doesn’t come easily and those around him tend to get hurt. Through three films, we’ve thrilled to Matt Damon’s interpretation of Robert Ludlum’s espionage hero in part thanks to the excellent filmmaking from directors Paul Greengrass and Doug Liman.

After skipping an installment that shifted the focus to a new agent played by Jeremy Renner, Greengrass and Damon returned this summer with Jason Bourne. Things have changed since 2007’s The Bourne Ultimatum as skullduggery has increasingly gone digital so the lengths required to keep secrets buried have to go further. The film, out now from Universal Home Entertainment, explores what all that means.

Bourne has been in hiding these last few years, travelling the world as a bare-knuckled boxer, using physical pain to tamp down the metal anguish he has been dealing with. After all, he knows bits and pieces about his previous life and has questions that haunt him, notably about his father’s involvement. 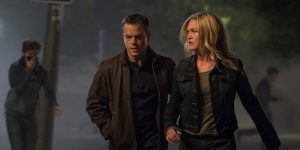 One of the few people he likes and trusts, Nicky Parsons (Julia Stiles) unexpectedly turns up with the answers. She has chosen to go rogue, taking stolen data from the CIA, and is on the run in the hopes of exposing the US Government’s dirtiest secrets. Unfortunately, she is also being hunted by a man known as the Asset (Vincent Cassel), kicking off the first of the anticipated action set pieces the series has been known for.

There is globetrotting, there are car chases, there are fistfights, and of courses there are twists and turns. Greengrass keeps things moving, throttling back when we need some exposition and then kicking things back into high gear as Bourne gets closer to the truth and the Asset gets closer to Bourne. 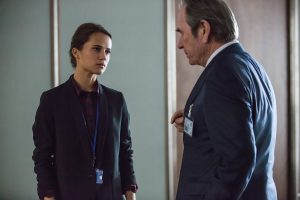 Orchestrating things from Washington is the new CIA director Robert Dewey (Tommy Lee Jones), aided by an ambitious and smart analyst Heather Lee (Alicia Vikander). Bourne doesn’t know or trust them (he, like I, miss Joan Allen) and yet, he can’t be rid of them either. All the threads come together in Las Vegas for the final portion of the film and it’s an overly extended assortment of chases, fights, and betrayals.

As a popcorn film, this is a cut above as it offers up thrills and raises topical issues. Bourne is one of the few figures on screen whose mere presence makes other characters truly worried (not something you can say about Superman, Bond, or Optimus Prime). His search for identity continues to propel him and things get explained at last but there are also contrived connections that undercut the drama.

Overall, it’s fun but Bourne never seems to change and grow from these experiences and Washington’s players seem to have traded in their humanity for ambition.

The film is offered in a variety of formats including the latest version of a combo pack: 4K Ultra HD, Blu-ray and Digital HD (goodbye DVD). Visually, the Blu-ray transfer is very good, which it needs to be considering the constantly changing pace, setting, and lighting. The DTS:X is also very good so you can hear the gun shots, tires screeching, and eavesdropping with clarity.

Damon turns up as host for several of the film’s by-the-numbers special features. There’s Bringing Back Bourne (8:15), a brief overview of how the team reuniting for a new chapter; Bourne to Fight, a three-parter featuring Bare-Knuckle Boxing (7:55), Close Quarters (4:27), and, Underground Rumble (5:59); The Athens Escape (5:37); and the two-part Las Vegas Showdown which focuses on Convention Chaos (6:36) and Shutting Down the Strip (8:24). Overall, you get a sense of the scope and scale of the physical action but the lack of attention to theme and character is actually quite telling.