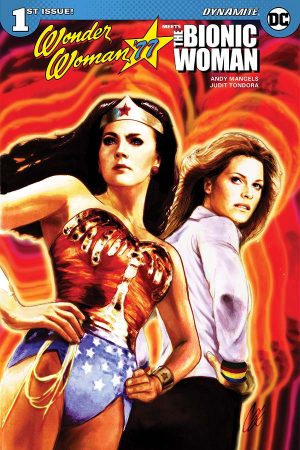 In the 1970s, there were few genuine heroes on prime time television and even fewer of them were close to being considered “super”. Instead, the three networks fed us giggly television, glossy and empty private eyes, and increasingly silly fare. As a result, our affection for the few genuine heroes is probably enhanced. Over on ABC, there was the Six Million Dollar Man and its spinoff, The Bionic Woman, along with Wonder Woman, for one season before it was moved to CBS. You might consider Kwai Chang Caine from Kung Fu or Carl Kolchak from The Night Stalker, but they lacked what you would consider powers.

Fans, of course, imagined these characters interacting since, after all, they were on the same network, which felt like the same comic book company. Sadly, though, the Amazon Princess’ adventures were during World War II, complicating any such meetings.

By 1977, though, she was having escapades in the present so such thoughts were possible. It just never happened until today when crossovers and mashups were possible. In the wake of fun things like Batman ’66 & Steed and Mrs. Peel¸ Dynamite’s Wonder Woman ‘77 Meets the Bionic Woman arrives today. I can think of no one better suited for the task than Andy Mangels, the most knowledgeable historian of all things Amazonian, who is also an accomplished historian of that era in pop culture.

He’s paired with Judit Tondora, a relatively new artist, with just a handful of credits to date. The basic premise has the world on high alert as a sinister cabal has a weapon and world peace is threatened. So mighty is the threat that rare interagency cooperation is required from the Office of Scientific Intelligence, where Jamie Sommers works as a special operative, and the National Security Bureau, where Wonder Woman slums as agent Diana Prince.

For vague reasons, Prince and Sommers are partnered to provide protection to CASTRA’s theoretical next target, a doctor. Before they can arrive, the building is under attack and in the aftermath, Steve Trevor is now convinced there is a mole in the Inter Agency Defense Command operation. Things blow up, people die, the heroes strut their stuff with accomplished ease but it all seems for naught as CASTRA inches closer to their goal.

As the first in a six part series, the elements, threat, and key players are introduced and we’re off to the races. Mangels characterizes the main cast nicely while everyone else feels straight from central casting. His script is overstuffed and despite the experienced lettering team of Tom Orzechowski and L. Lois Buhalis, the pages are jammed with word balloons.

Tondora gets the heroines looking right but his storytelling needed far stronger art direction so the pages and panels flowed more smoothly. Characters move about in questionable ways and actions in one panel don’t always make sense in the next. Complicating his work is the volume of words and balloons, making attractive page design almost impossible.

These are 22 jam-packed pages that sets things up but maybe we needed a little less opening action and a little more airing out so the characters could do more than trade quips. It’s a promising enough start and maybe these issues will be addressed in subsequent installments.