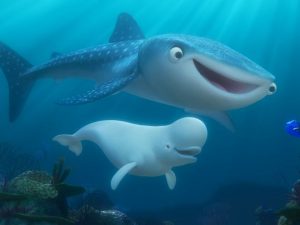 When Finding Dory was released in movie theaters earlier this year, the stunning sequel to Finding Nemo was an instant smash. The aquatic adventure has since splashed past $1 billion at the global box office and is currently the fifth highest-grossing animated movie of all time. The film hit Digital HD channels this week.

The blockbuster swims home in time for the holidays when it is released on Blu-ray 3D, Blu-ray, DVD and On-Demand later this month, when audiences can watch Dory’s hilarious and heartwarming quest to find her family. Fans will also be able to continue the underwater story with hours of immersive bonus features featuring the creative talent of Pixar and the all-star cast.

To celebrate the in-home launch, we dive deep into the kelp to find out more about the making of the film as we chat to Ty Burrell and Kaitlyn Olson, who provide the voices of Bailey and Destiny in Finding Dory…

Finding Dory is an amazing underwater adventure. How much do you love the ocean?

Ty Burrell: I am a big fan of the ocean. I didn’t grow up near the beach – but every summer, we would go to the beach and I would swim in the sea for a couple of weeks at a time. I grew very attached to the ocean. Being underwater is something I did for almost all of my growing up. I try to bring my kids to the water as much as possible, so that they grow up around it, too.

What about you, Kaitlin? Are you a fan of the sea?

Kaitlin Olson: Well, I’m not a big fan of boats. I am the person in the car who will always get car sick, so I do not care for being on a boat – but I like swimming in the ocean. And I love fish. I haven’t been to an aquarium for a long time, but we went to Fiji on our honeymoon and we spent a lot of time in the ocean there. We snorkeled and looked at the coral reef, which was really special. I’m not a big fan of cold water, but I’ll swim all day long in warm water. To me, that’s bliss.

What do you love the most about your quirky underwater characters in Finding Dory?

Kaitlin Olson: I love the fact that Destiny is sweet and lovable because she’s insecure about not being able to swim very well. I love her little brother/sister relationship with Bailey, too. For me, it was really nice to play a really sweet character. 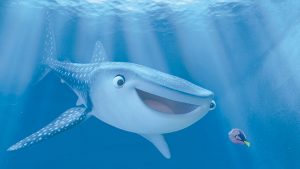 How does your eyesight compare to Destiny’s?

Kaitlin Olson: My eyesight is perfect. Thank you for asking! Although I’m sure it’s headed downhill for me pretty soon…

What do you love the most about Bailey, Ty?

Ty Burrell: I don’t play a pessimist in my day job on Modern Family. Phil Dunphy is an indefatigable optimist, so it’s fun to play a character who is as neurotic as Bailey in Finding Dory. Bailey is a nice, well-intended whale who is very flawed and full of doubt. He’s probably much closer to me than Phil.

How much fun did you have in the recording booth for Finding Dory?

Kaitlin Olson: It was a lot of fun in the recording booth. Working with [Finding Dory director] Andrew Stanton was great. He’s a real actor’s director, so it was a wonderful experience.

What was the funniest thing to happen to you in the recording booth?

Ty Burrell: Bailey is a Beluga whale and when I researched the animal online, it looked like Belugas are heavily congested. Just look at their heads and you’ll see what I mean. I came into the recording booth with the idea that Bailey would have a really congested voice, like he had a bad cold. When I finished my first scene, there was a long stretch of silence. They were super, super nice about it – but they said, “Well, now let’s try a different voice. Why don’t we try your voice for the whole film?” That worked out much better.

What funny experiences in the recording booth can you share, Kaitlin?

Kaitlin Olson: For me, the craziest thing was when they decided that my character doesn’t swim very well, so they wanted me to sound like I was swimming off-balance. I think they assumed it would be hard to do, so they brought in this weird balancing board that I was supposed to try and stand on whilst saying my lines. It was so weird! I was like, “Let’s just get rid of this board and let me act it out instead.”

Did you try the balancing board?

Kaitlin Olson: I tried it for two hours, but I wasn’t really off balance. Apparently, my balance is impeccable because I was doing fine, so I had to pretend to be off-balance and that was even worse. We ended up getting rid of it quite quickly, although I had some amazing ab strength the next day. It was definitely great for that.

Have your thoughts on underwater life changed since working on Finding Dory?

Kaitlin Olson: Definitely. The movie’s made me think a lot about rescue and rehabilitation for ocean animals, as well as ocean conservation. We’ve got to make sure our planet is still here for our children, so that’s very important to me. I’m very focused on making sure that we keep our oceans clean and that we take care of everything down there. We need all of those species. They all serve a purpose.

Ty Burrell: I agree. I love the way that Pixar creates a whole universe that audiences haven’t really experienced before. We’ve never really spent that much time underwater, but we have now with Finding Dory. Today, I see the ocean a little differently. In a weird way, I see it more as a little community down there – but it’s a community that we have to make sure survives.

What excites you the most about the in-home release of Finding Dory?

Kaitlin Olson: I’m really excited about the in-home release because my four- and five-year-olds are addicted to Finding Dory. We’ll be watching it over and over and over and over again! Sometimes it’s hard to take your kids to the movie theater and not every age can sit and watch a whole film. In my house, the greatest thing about watching a movie is that my older kid can sit there for the whole film and the little one can get up and go to the playroom for a bit if he gets antsy – and then he can come back to watch the rest.

How much do you enjoy watching movies at home, Ty?

Ty Burrell: As a family, we love movies. In fact, we have a movie night every Friday at home. Finding Nemo was part of that, and now Finding Dory will be involved. My kids saw the movie at a screening and they loved it. That won’t be the last time they’ll want to see it!

Why does the world love Dory so much?

Kaitlin Olson: The world loves Dory because she is fallible. She’s a really sweet character who is funny because she’s masking an insecurity. I think a lot of people can relate to being a little imperfect, just like her.

Ty Burrell: For me, I don’t know if Ellen DeGeneres gets enough credit for her acting skills in the movie. Ellen is a really talented voice actor and Dory is lovable because Ellen makes her lovable. She’s great.

What would you like to ask Dory if you met her in the ocean?

Ty Burrell: Boy, that’s a good question! I’d ask her, ‘How do you stay so positive? How do you keep that much optimism in your life?’

Kaitlin Olson: Yes, how does she maintain that optimism? That’s a real skill. Dory doesn’t let anything get her down and that’s impressive. She, “Just keeps swimming.” I think we can all learn from Dory in that respect.

Pixar animators love to hide Easter eggs and secret movie references inside their films. Do you ever pause and try to find them?

Kaitlin Olson: This is all very new to me, but I heard how they like to hide things in Toy Story and its sequels. I can’t wait to try and find them in Finding Dory. I haven’t spotted the Pizza Planet truck yet, but I will soon. My son will help me. He’s a good spotter.

Ty Burrell: You know what? I think I know one of the Easter eggs. You can correct me if I’m wrong, but my friend was saying that she thought she saw a character from Inside Out looking through the glass in the Marine Life Institute. That might be one! I can’t wait to try and find more…