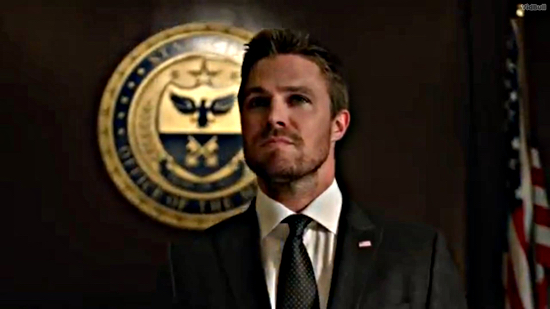 What’s the pothole situation in Starling City? And the re-zoning hassle – that still a headache? And the business with the access lanes to the bridge – was that ever settled?

Since Oliver Queen’s been elected mayor, it’s reasonable to think that this kind of mayoral busyness is the better part of his days. At night, of course, he puts on a mask and hood and grabs his bow and arrows and kicks (or maybe punctures) miscreant ass. Oh, and his also training a bunch of wannabe vigilantes to help with the kicking/puncturing – and not always being Mr. Nice Guy while he’s doing it. (Maybe he’s got some marine drill sergeant DNA?)

The question is, who is better for Starling City, the politician or the archer? If you’ve been paying attention to the news, you’d probably choose the archer because obviously anybody would be better than a politician.

But that can of worms will be left unopened. Tell you what: let’s reframe the question. Who’s more useful to a storyteller, archer or pol? I guess it depends on the kind of tale being told. A story by…oh, say, Aaron Sorkin or Robert Penn Warren or Allen Drury would perhaps fare best as political drama. The kind of fantasy/melodrama/action tale we’re considering here is better with an ass-kicker as its protagonist. Which leaves our man Ollie where? 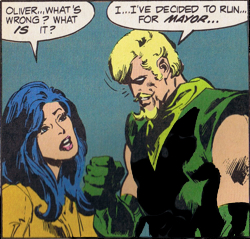 A kind of hybrid, one who favors the arrow shooting part of his persona, is where. That’s pretty much how it has to be. Nobody with a taste for adventures – that is, nobody who’s Arrow’s natural audience – is going to tune in to watch a guy in a three-piece suit behind a desk reading policy papers. We want to see some arrows shot and some of that good martial arts action! Leave that other stuff to CNN.

Casting a superhero as a civic leader, it seems to me, strains the genre. Part of the appeal of costumed superdoers is that they can do what duly constituted authorities can’t. Where a mayor’s job ends, theirs begins. One explanation for adopting a second persona – and it’s not a bad one – is that the disguise keeps the bad guys from knowing who to wreak revenge on. The other reason for a civic leader hiding behind a costume and fighting crime is that he couldn’t do as mayor what he does as vigilante because the vigilante must break the law to do his deeds. But whoa! Don’t mayors swear to uphold the law? We got us some hypocrite mojo working here?

Another deep appeal of double-identited heroes might require some psyche excavation. The idea is, we all have more than one identity lurking within us – we behave differently in different situations – and we might feel that the real us is one of those unseen lurkers. Costumed heroes manifest this idea and also give us a hook into identifying with the good guy.

I think part pf the storyteller’s task is to make the two identities distinct and that’s often a failure. I tried and pretty much failed to convince my Batman writers that Bruce Wayne should present himself as a tough-as-nails businessman, but as a good-natured bumbler. And I never liked Clark Kent as the best reporter in town. (Didn’t he win a Pulitzer?)

Of course, as always, the secret is in the recipe, not the ingredients. If the story entertains, the creators have done their jobs and they’re free to go watch tv. Wonder what’s on the CW?