So here I am, this slightly chilly afternoon in October, Columbus Day, as a matter of fact, not celebrating slavery, racism, the exploitation of indigenous peoples, imperialism – those are the values the sailor man represents, aren’t they? – just sitting in my (as always) messy office, thinking about Mighty Mouse. 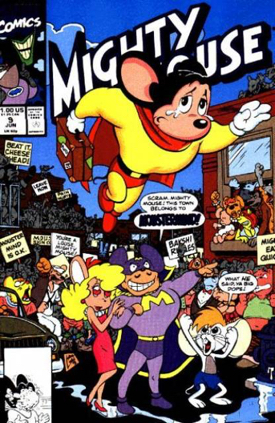 Guess we didn’t finish with the Mouse last week.

Maybe I’ll never finish with the Mouse, though I have no intention of writing a story about him nor will I be buying a DVD that presents his adventures, assuming such a thing exists. I mean, I can still remember him after all these years, so why would I forget him now?

Maybe it was his costume that drew my approval. It was pretty generic – tights, cape, little under pants worn on the outside, just like Superman and Batman – but it was the suit sported by an animal and, to my seven year old self, that made it special.. Oh, I enjoyed the other talking animals that cavorted across my neighborhood theater’s screen – Bugs and Daffy and Woody and Porky and Donald (the duck, not the politician) and another mouse, Mickey and maybe some others. But Mighty Mouse was something different: I might have called him, a bit inaccurately, sui generis, if I‘d ever encountered the term and had any idea what it meant.

I must have been aware that the costumed rodent was very, very similar to another kids’ entertainment, the comic book heroes. That caped clothing – it could have been an early version of what Superman wore. One way in which MM differed from Superman: the mouse’a outfit costume was restyled at least twice… although Superman’s threads did, in fact, change over time, I think we weren’t supposed to notice.

A person looking at Mighty might also be reminded of Captain Marvel and his family which included a creature mighty close to Mighty, Hoppy the Marvel Bunny. But the young me probably considered Hoppy a second stringer; he didn’t have his own comic book and he never made it into the movies. Yeah, nice enough but definitely an also ran.

Like his human counterparts MM eventually had a secret identity – Mike Mouse. He also had, over the years, three girlfriends, though I’m sure he saw only one at a time and accepted blame for the breakups. (Heroes are not cads.)

He was never a superstar, our Mouse, but he was fairly long-lived. He bopped around pop culture for decades in diverse venues: there were the 80 or so movie shorts, beginning in 1942 and ending in 1961 and a comic book, and in 1987 a Saturday morning television series. I assume that MM’s image also graced lunch boxes, maybe t shirts and pajamas, but I don’t really know – I was never lucky enough to own such treasures, if they existed.

Will Mighty again come to save the day? I guess it’s possible. But let’s agree that we can let him rest in limbo, at least for now.