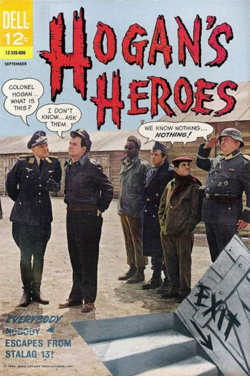 We could spend the rest of this year debating which American teevee show has been the weirdest, but Hogan’s Heroes has got to make the top 10 list.

The high-concept: Hogan’s Heroes is the story of a group of Allied prisoners-of-war who operate a highly effective spy and sabotage operation from a bunker beneath their prison building during World War II. Okay, that’s kinda weird. It’s also kinda in bad taste. Its weirdness is abetted by several additional factors, not the least of which is… there’s some truth behind the laughs.

There really was a WWII POW named Robert Hogan who did time in a place called Stalag 13. He was Lt. Robert Steadham Hogan, a B24 pilot who was shot down on January 19, 1945 in while on a mission over Yugoslavia. Because he was an officer, Hogan was incarcerated in the Oflag 13 camp outside of Nuremberg because the Stalags were for enlisted men only. However, Oflag 13 was next door to Stalag 13, or, to be overly specific, Stalag 13D. He and his fellow prisoners had a contraband radio that was discovered by the Germans… but they were allowed to keep it because that’s how the Germans got their unfiltered news as well. 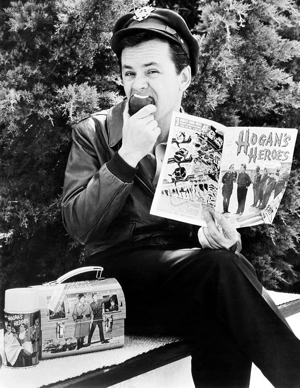 Given that it was 1945, Hogan was a POW for a “mere” six months. The television show ran for six years, which, for you young ‘uns out there, was longer than the American participation in the War. Then again, Sgt. Rock fought that same conflict for about 35 years, give or take.

After the war, Hogan became a doctor in the Birmingham Alabama area. He enjoyed the teevee series, and, with his sons, met Bob Crane in 1966. However, the producers – obviously – maintain that all of this is a mere coincidence, albeit a fantastic coincidence.

Perhaps. But Hogan’s Heroes is weirder for other reasons as well.

Werner Klemperer, who played the notoriously bumbling commandant Col. Klink, fled Nazi Germany along with his father Otto, a famous orchestra leader in Germany. Werner also was classically trained, playing violin and piano and leading the Buffalo NY orchestra. Klink wasn’t Werner’s only Nazi role: he was a Nazi judge in the movie Judgment at Nuremburg, and he played the lead role in the movie Eichmann. According to IMDB, his last role was as the voice of Col. Klink in a 1999 episode of The Simpsons. 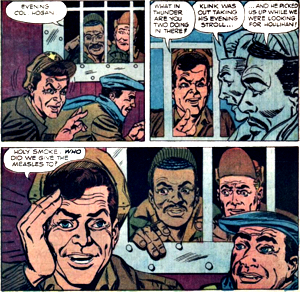 Robert Clary, who played Cpl. Louis LeBeau, was a French Jew (original name: Robert Max Widerman) who was incarcerated in the Nazi concentration camp at Ottmuth and was later sent to Buchenwald. Twelve other family members died in the camps. Like Klemperer, he had no problem performing in the Hogan’s Heroes series.

However, Leonid Kinskey did. He appeared as Russian POW Vladimir Minsk in the show’s pilot. When the show was picked up by CBS, Kinskey bailed. Upon reflection, he thought there was nothing funny about POW camps. He had a long and rich career in both movies and television, and is perhaps best known for his performance in Casablanca.

Finally, Hogan’s Heroes was so successful it fostered a Dell comic book of the same name. The artist on many issues was the co-creator of Spider-Man, Doctor Strange, and many other great comic books.