Dennis O’Neil Comes To Save The Day! 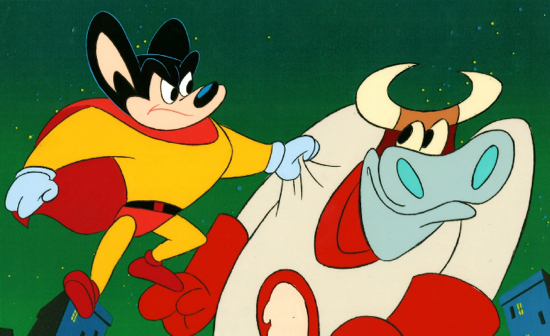 But wait! That chap at the rear of the room, scratching his bald head, his long, curled fingernails tearing bloody streaks in his taut scalp – yes, him! Is he puzzled because he’s never heard of Mighty Mouse? Well, it’s probably unkind to leave him in torment, so, briefly:

Mighty Mouse was created in 1942 as an animated cartoon character destined for theaters – gotta plump out those double bills, particularly the ones that cater to the kiddies. He starred in 80 movie shorts until he took a long vacation in 1961 and returned from it in 1987 when Ralph Bakshi did a Mighty Mouse series destined for Saturday morning television. (And since we seem to be digressing, another factoid: One of Bakshi’s scripters was Doug Moench, who wrote hundreds of comics for Marvel, DC and, I think, Warren. And Doug, if I’ve forgotten any of your publishers, forgive me. I’m not as young as I used to be.)

But weren’t we noticing MM’s theme song? Yes. Well. What I sang last night, at the dinner table, was, “Here he comes to save the day / Mighty Mouse is on his way.” My bad. The real lyrics:

Okay, maybe you don’t think that switching pronouns is important, but others might beg to differ! And that second line? Doesn’t it suggest that the Coming of the Mouse has some greater meaning? Offering, perhaps, some existential hope? Even a promise of existential hope?

But wasn’t I telling a story, way back at the top of the page? Yes I was! To continue, then: the person sitting across from me, whom I’ve known for over 65 years – I’m not really sure of his birth date – suddenly continued the impromptu recital that was being created:

Yes sir, when there’s a wrong to right / Mighty Mouse will join the fight!

Now, you have to understand that this person has no direct connection to pop culture – he’s a grocer if you must know – nor have I ever observed him to have any particular interest in it (though he does like the old Have Gun, Will Travel show.) Yet here he was in in my dining room, with no hesitation, singing the lyrics to a long gone cartoon presentation.

Did I mention that I’d never heard him sing before?

The question I have for you, my friend, is, what the heck is this column about? Which itself begs another question: Did you see that coming?