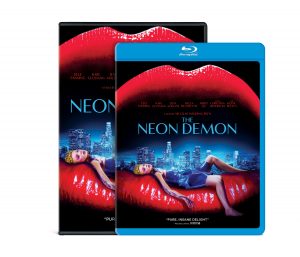 European filmmakers seem to favor theme and concept over actual execution which may be one reason why American audiences appear so resistant to the overseas offerings. For example, Danish director Nicolas Winding Refn had a fairly interesting idea about exploring female villains, inspired by the real life doings of mass murderer Countess Elizabeth Báthory. He coupled that notion with the universal themes of youth and beauty, setting his tale in Los Angeles and the fashion model field. Unfortunately, despite a strong American cast, the European sensibilities failed to bring the ideas to life and The Neon Demon arrived cold, sterile, and thoroughly uninvolving. The film is out no on home video courtesy of Broad Green Pictures.

We open with a striking visual of a blood-soaked Jesse (Elle Fanning), attired in blue, prone atop a settee. Of course, it’s for a shoot and the 16 year old has arrived on the West Coast in search of work as a model. She somehow met up with much older Dean (Karl Glusman) who shoots these test photos for her to use to sign with an agency.

Everyone tells us she is young, innocent, and has that certain something that will make her a star. Refn keeps telling us this and never, ever show us this magical quality so we’re left to wonder. Fanning’s deadpan performance makes her less human and more mannequin so any sympathy we should have for her is absent. So little is revealed about her past life that we really never get to know her, which is a shame.

Jesse befriends makeup artist Ruby (Jena Malone) who clearly has the hots for her. In turn, Ruby introduces her to models Sarah (Abbey Lee) and Gigi (Bella Heathcote). They see in Jesse that their sell by dates are rapidly approaching despite all the artificial work Gigi has proudly done to her body. 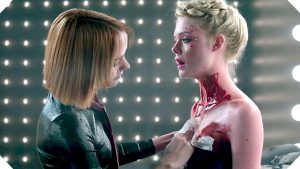 After she’s hired by Christina Hendricks, the only performer to infuse life into her character, Jesse is sent to top photographer Jack (Desmond Harrington), who forces her to strip nude and covers her in gold paint for the shoot. Somehow this gets her work but there’s a lot of narrative tissue missing from this. It also way too quickly transforms Jesse from innocent to narcissist, driving away Dean and robbing her of any sympathy. It’s all wasted and dull screen time.

Then you have her living in a squalid motel run by Hank (Keanu Reeves in a head-scratching bit part) where a mountain lion has entered her second floor room and destroyed it. Dean comes to her rescue here but the relationship goes nowhere.

There are so many interesting ideas in Refn’s head that it’s a shame they never made it to the script or screen. The film is intellectually vapid but visual stunning at times. Credit has to be given to production designer Elliott Hostetter, costume designer Erin Benach, and cinematographer Natasha Braier.

The narrative in the script by Refn, Mary Laws, and Polly Stenham is so disjointed, filled with long silent stares you wonder if the entire cast has gone mute. There is one restaurant scene where ideas are introduced but that’s the sum of intellectual heft. The notion that the fashion industry devours its young plays out literally in the latter stages. But first, we deal with sexual assault and a disturbing bit of necrophilia that does little to advance the plot.

The final fate of Jesse and the other models is morbid and vague and horrific after what seemed more like a psychological thriller. A talented cast is robbed of a chance to do good work thanks to a shoddy script and director less interest in people than themes.

The film was released via Amazon Films, and is now out on Blu-ray. The high definition transfer nicely captures the stylish visuals. The audio lets you hear every note of the annoying electronic score by Cliff Martinez. The spare special features are a director’s commentary, a trailer, and a brief look at the film.