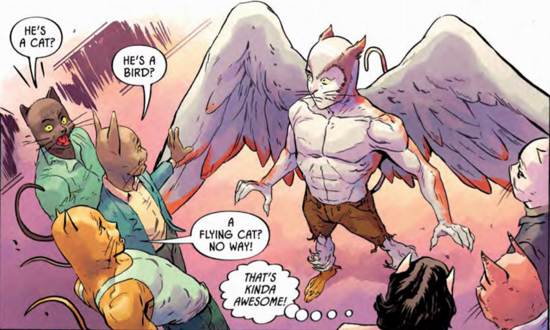 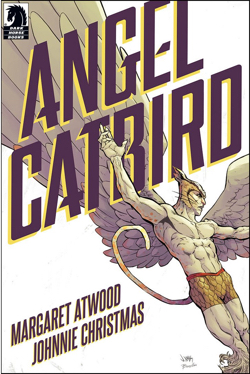 I’ve been traveling a lot for my day job. It’s been hectic and crazy but it did give me a chance to catch up on some comics I’ve been trying to read. Not sure if you remember, but about a year ago Dark Horse Comics announced acclaimed writer Margaret Atwood would be coming to comics with her original title Angel Catbird. The moment I heard about it, I was beyond excited. Really, I even wrote about how I was excited. Well, volume 1 was released on September 6th and I’ve finally gotten a chance to read it.

Ok, so before I talk about the comic, I want to talk about how amazing the introduction was. When you are talking about Margaret Atwood, a glimpse into herself is a great thing. She wrote the introduction herself, and you can’t really even call it an introduction. It is more like a journey through her childhood hopes and dreams. Who knew that she wanted to be an artist? Or was a huge comics reader as a kid… and still is as an adult? Atwood, one of the most important and influential authors of the 20th century, and she has the unrealized goals of being an artist. She spends time throughout the introduction also talking about her development process for this comic, as well as her partnership with Nature Canada. If you’ve ever wanted to know more about her, just read this.

Angel Catbird is a pulp-style comic following a young scientist who gets accidentally dosed with a genetic formula he is creating to become Angel Catbird, a half cat/half bird human hybrid. When that happens, he finds out that human-animal hybrids already exist and in the middle of a very big fight with a not so nice half-rat man. In the introduction, she mentions reading comics in the ‘50s and you can definitely see that influence in Angel Catbird. It’s got a fun, simplistic story that is enjoyable for young kids and adults. And if you don’t believe me, think cat band and high-tech rats.

The art of Angel Catbird mimics the older style of comics and reminds me of the Archie comics I read as a kid. It fits the story perfectly. Johnnie Christmas really captures her writing perfectly in the art and he pairs well with the coloring by Tamra Bonvillain. They also outline their character design process at the end of the graphic novel, as well as some guest art pieces.

Well, this comic is really activism wrapped up in pretty pictures. Proceeds are going to Nature Canada, and within the introduction, Atwood mentions a pledge to have cats stay indoors to help save birds. The story also includes facts about cats throughout the story. I can only guess that bird facts will be included within volume 2, but I’ll have to wait for 2017 and volume 2 to find out.

I was looking for a lighthearted, enjoyable read, and that is exactly what I got. Angel Catbird is not an in-depth, dark tale but its purpose is to highlight the real dangers towards cats and birds in the wild and it accomplishes that in a fun way. Also, the introduction, if you didn’t guess, was a big and amazing wonderful addition for me. It was a perfect airplane read and one I would totally recommend.