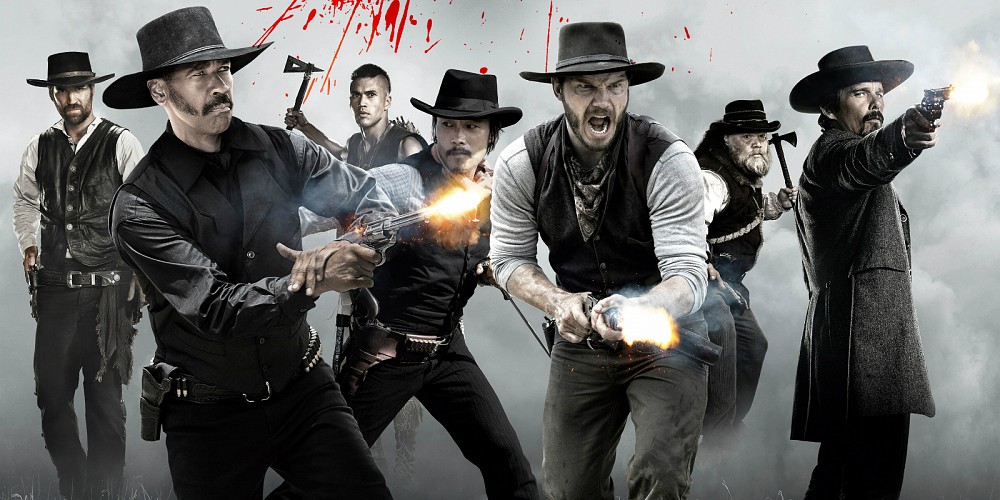 If The Magnificent Seven had a title like Seven Cool Cowboys, I would be here writing a rave review. This remake is a good, fun western that might employ a lot of well-worn tropes, but has a good enough cast and a light enough tone to make it work quite well. I had a great time watching it almost the entire time I was in the theater. The problem comes from using the name of an older movie, a different movie, a better movie, and most importantly a movie with a point of view entirely ignored for this iteration. The Magnificent Seven is a fine movie but it’s an awful take on the original and it needs to carry that weight.

The Magnificent Seven hits all of the basic bits of the original film. Outlaws take over a town, townsfolk enlist a ragtag band of assorted cowboys and ne’er-do-wells to fight off the incursion, they train the civilians to help defend their town, and then a big battle ensues. What it misses is the thematic hit. The original Magnificent Seven (and the Kurosawa masterpiece it’s based on) ends with the heroes remarking that while they won the battle that they lost because their time is over, the world isn’t going to need gunfighters forever. The remake discards all of this: there’s no sense of ennui or longing, the surviving heroes ride off confident in their work and their status of heroes. Again, in any other western this wouldn’t be a problem— but for this one it seems like they took the name, they took the premise, and then they discarded the theme. I hate that they did that, it makes it look the name was a cheap ploy to lure in an audience that probably hasn’t seen the original but can be brought to the theater just on name recognition.

It’s a shame that no one thought this movie could make it on its own steam because there’s a fine cowboy movie here. Denzel Washington is one of the best actors alive and he’s fantastic in this movie, even though he can sometimes feel a little crowded out by the ensemble. It’s unfair to make Chris Pratt play across from Washington, because even though Pratt is charming and funny he withers from the comparison. Vincent D’Onofrio is playing the strangest part I may have seen in a movie all year but he’s inexplicably crushing it— I guess talent is the great equalizer. The rest of the cast is good (with the possible exception of Ethan Hawke, who might just have nothing to show me anymore) and they do an above average job playing some broad genre stereotypes. Do I wish that the two strong silent types weren’t also people of color? Yes, but I suppose I can live with it.

There’s nothing in The Magnificent Seven that particularly reinvents the wheel (reinvents the horseshoe?) when it comes to western action, but I’m ultimately fine with that. We don’t get westerns very often lately, and when we do they’ve been by either Quentin Tarantino or Seth MacFarlane and those haven’t exactly been typical westerns by any means. There’s a part of me that doesn’t mind seeing the same showdowns, the same bits of dialogue, or even the same shots. I miss the western… and if I can only get it in small doses, I can understand if they only want to play the hits.