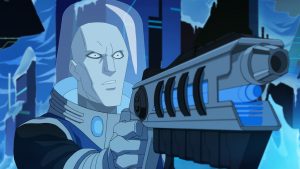 In this relatively thin screenplay from Kevin Burke & Chris “Doc” Wyatt, to Batman (Roger Craig Smith) and Green Arrow (Chris Diamantopolous), resort to wearing mech suits to sop the latest wave of terror in Gotham City courtesy of Mister Freeze (Oded Fehr) and Penguin (Dana Snyder). This time they have turned Bane (Carlos Alazraqui) and Killer Croc (John DiMaggio) into oversized monsters, necessitating the heroes suit up. And to help even the odds, they recruit Robin (Lucien Dodge), Nightwing (Will Friedle), and The Flash (Charles Schlatter). 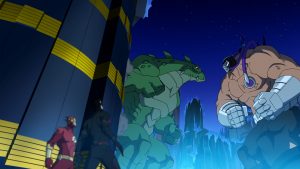 The mayhem moves at a reasonable pace thanks to the steady direction of Curt Geda but there’s little in the way of character or consequence to the total event. It looks fine on this original made-for-video offering.

The sole bonus feature is the far superior “Night of the Batmen” episode from the missed Batman: The Brave and the Bold. Unlike the previous two, this comes as a straight single-disc DVD with no bonus toy.