Bob Ingersoll: Daredevil, Punisher and Where To Get A Fair Trial 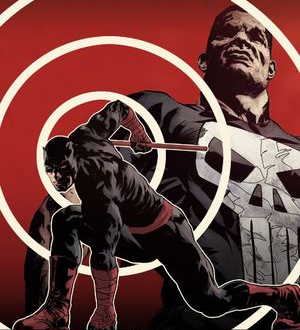 There’s an old joke I’m not going to repeat. It’s long; not very good; and, worst of all for a joke, not particularly funny. I bring it up because it’s punchline, “You can’t get there from here,” has a great bearing on the comic we’ll be discussing today.

What comic? My pun-ishing headline indicates, it’s a comic featuring Daredevil, Matt Murdock, and a change of venue in a trial. And that means it’s Daredevil/Punisher: Seventh Circle.

We learned in the first issue of this mini-series that there’s this gangster named Sergey Antonov, see, and he’s a bad man, see. How bad? Well, he didn’t shoot a man in Reno just to watch him die, but he poisoned a rival gang’s boss’s Christmas turkey just to get him out of the way. Unfortunately, the rival boss’s whole family was eating that turkey. Four generations – most of them innocents – died because of Antonov’s actions. That’s how bad.

Which leads us to several points of discussion. First: what’s venue? To answer that I have to take us back to the time when we weren’t the United States but thirteen colonies under the British Empire. (Okay, I don’t have to, but I’m going to. How else can I show off all this historical knowledge I picked up in law school?) Back then, King George III had people who committed crimes in the colonies transported back to England for trial. The colonies didn’t like this. They even included it as one of their grievances with the Crown in the Declaration of Independence.

In order to prevent that from happening in the United States of America, the Founding Fathers put a clause in Article III of the United States Constitution requiring all criminal trials must be held within the state in which the crime was committed. But the Founding Fathers didn’t stop there. They also included a Vicinage Clause in the Sixth Amendment’s trial by jury provision dictating that the jury be composed of people who live within the state and district where the crime occurred. That district where the trial can be held, that’s the venue.

Killing four generations of one family with a Swift Botulismball Turkey would be a felony. Actually, it would be a lot of felonies; four generations worth of felonies. Felonies are tried in county courts in most states – Louisiana and Alaska have parishes and boroughs instead of counties – so for a felony trial in New York, the proper venue would be the county where the crime occurred. As Matt Murdock, who works for the District Attorney in Manhattan, is prosecuting the case, we’ll assume Antonov’s crimes occurred in the county that contains Manhattan; New York County.

Matt successfully moved to change the venue of Antonov’s upcoming trial, bringing up our second point of discussion: what’s a change of venue? Pretty much exactly what it sounds like. Sometimes a case is so highly publicized that it’s difficult to find people who haven’t heard about the case or formed an opinion about it before the trial started and the proper venue can’t assemble an unbiased jury. When that happens, the defense may seek a change of venue, so that the case can be tried in a different venue; one where the jury hasn’t heard about the case and isn’t biased.

Having Matt Murdock request a change of venue to Texas, on the other hand…

And, yes, that is our third point of discussion.

Remember what I said earlier about Article III, dictating that a trial must be held within the state wherein the crime occurred. That means the only state that has jurisdiction to try a criminal case is the state where the crime occurred. Texas would have no subject matter jurisdiction over a crime committed in New York and a DA’s office could not ask that a New York criminal trial be transferred to Texas. The Constitution would permit changing the venue to some other county in New York. It would not permit changing the venue to some other state, like Texas.

There’s also no reason to move the trial to Texas. I’m a reasonably educated and well-read person but I’m up in Cleveland and I really couldn’t tell you much about the criminal goings on down in Cincinnati; except for this one noted case of vandalism involving a radio station and Thanksgiving turkeys. I don’t care how infamous Antonov’s crimes were in Manhattan, I can’t believe knowledge of his crimes was so wide-spread or pervasive that you couldn’t find twelve jurors in, say, Chautauqua County New York who hadn’t heard about or formed an opinion about the case.

For the record, I choose Chautauqua County because – check a map  – it’s about as far away from Manhattan geographically as you can get and still be in New York state, not because I think it’s provincial. I doubt they’re all that familiar with Manhattan’s crimes in, say, Jamestown or Celoron. Besides they’ve been a little preoccupied there with that “Scary Lucy” statue.

So why did the judge grant Matt’s unconstitutional request to move Antonov’s trail to Texas? I have no idea. We didn’t see the change of venue hearing or meet the judge, so I have no way of knowing why the judge did what the judge did. There could be a few reasons. Hell, considering Matt’s history of unethical behavior, we can’t even eliminate bribery.

Literally. We found out why Matt chose Texas in Daredevil/Punisher: Seventh Circle # 4. And that’s another story. (Okay, it’s a later chapter in the same story but for the purposes of the joke that’s as good as another story.) And because it’s another story, it will also be another column.

Or, in the immortal tradition of comic books everywhere, to be law-tinued.