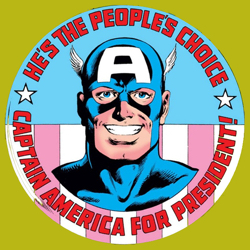 Some kind of contest going on? Oh yeah, the president thing. I guess I should care…

But a lot of us don’t. I’m reminded of a folk song I haven’t heard since the muddled days at the university, titled “The Vicar of Bray.” Here’s a taste:

And this be the law, I shall maintain

Until my dying day, sir

That whatever king may reign,

Still I’ll be the vicar of Bray, sir.

In other, less metered words, the day-to-day of the ordinary citizen, doesn’t usually change much after any given governmental upheaval. No matter who occupies the carpeted corner office or plunks his ass onto the throne, the guy who delivers the mail will continue to deliver the mail. And the shivering folk on that side of town will continue to be hungry.

So, yup, there are a couple of presidential campaigns afoot, and some other office-seekers asking for the favor of your vote, too, and you may or may not give a hoot. If you’re a character in a comic book, you probably don’t.  Politics don’t get into comics much. I think a lot of the reason is that stuff we discussed last week, the tendency of fiction writers to be stingy with the minutiae of their hero’s existence less they offend readers who absolutely despise and abhor the collecting of doilies, the hobby you gave the aforementioned hero. Or like that.

(The one time that I made politics part of a storyline by having a character elected mayor, I did what was customary and did not supply a party affiliation. I don’t think it occurred to me to do anything else.)

Climb up out of the comics page to the editorial office where it was incubated in what we jokingly refer to as The Real World and in matters political, it’s much the same.

I worked in comics for more than 50 years and I remember very little mention of politics in the publishers’ headquarters. Oh, there were creative folk who, I knew, shared my opinions and in the natural course of a meeting or a lunch we’d occasionally get around to talking about such matters, but they were never part of our work. I honestly don’t know how folks voted, and this does not impoverish my life.

I’m aware that, a while back, there was a rumble in the comics world when some freelancers said that their conservative political views cost them assignments. I’ve known and worked with one of these guys for decades and there are few creators that I respect more. So if he said that something ugly happened in his professional life, as far as I’m concerned, something ugly happened.

But that was not my experience. Liberal bias? It seemed to me that there was a slight conservative bias in all aspects of comics, partly because comics grew up in a world at war, when patriotism was a valid response to what was happening abroad.

Almost everyone was a patriot in World War Two, and you’ll get no complaint about that from me.

Let’s not mention other wars.