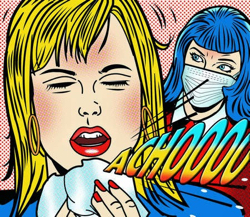 Here’s a scenario straight out of a political thriller by Brad Meltzer, a satirical graphic novel by Gail Simone, a seasonal arc of 24, or the warped mind of your columnist:

In response to this news, Donald Trump has tweeted “Told you she was sick!”

Hoo boy, if I posted that on my Facebook page I’d be the darling of every conspiracy nut in the world. And might even warrant a visit from the Secret Service…or Jack Bauer. (Chloe, you rock, woman!)

I didn’t see Hillary “stumble/collapse” yesterday morning at the 9/11 memorial service, but Mike Gold told me about it later in the day as we talked on the phone (get well, chief!) and I did a quick search on the web and watched the “retread” on YouTube.

I gotta admit, the woman did not look well, and, no, it wasn’t that hot out on Sunday morning – low 80s. (If it had occurred on Saturday, when the mercury was kissing 100°, her personal assistant’s comment that Hil’ was “overheated” might have had some traction.)

However – and I stress the however – in my professional opinion I don’t believe Hillary is “ill” in that morbidly funereal hushed voice that people use when terminal diseases are diagnosed. Nor – and I stress the nor – do I give Trump’s horribly insulting and misogynistic statements about Clinton’s stamina any credence whatsoever. The extreme opposite is true, im-not-so-ho – Trump could never in a million years endure the 13-hour kangaroo court grilling of that so-called [zillionth-and-one] Benghazi Senate Investigation. He would have broken down in cry-baby tears after the first five minutes and then tweeted nasty things about his “Inquisitors” for the next 24 hours.

Nah, my guess is – based on that cough she displayed a week or so ago – that Mrs. Clinton probably has a touch of walking pneumonia. Around my “office” – quotes because an operating room is not an office – for the last month, and just about everybody has had at the least a sniffle or a sneeze or feeling like shit. But while any of us can take a day or two off to recover, Hil’ can’t – or won’t. Wouldn’t surprise me at all if at least one person on her staff has been trying to get her to take it easy for a day or two.

But it’s not the state of Hillary Rodham Clinton’s health that has me worried.

It’s the – and you’ll excuse the expression – the State of the Union if Donald Trump becomes President of the United States of America.

It’s the State of the World.

Marcus Feldenkirchen, Velt Medick, and Holger Stark, reporters for the German news organization Der Spiegel, one of the most respected on the globe, wrote in their February 16 2016 article “Donald Trump Is The Most Dangerous Man In The World:”

“…what Trump wants: to be feared. His bid for the White House, long ridiculed, is a fight for a ruthless, brutal America. Behind his campaign slogan “Make America great again!” is the vision of a country that no longer cares about international treaties, ethnic minorities or established standards of decency.”

And his, from the country whose citizens know what happens when intolerance and a belief in racial superiority takes over:

“…Trump’s belief that he is genetically superior to most people in the world. In all of their conversations, he notes, Trump kept returning to the notion that by virtue of his birth, he is simply better than other people in many areas — from playing golf to being a businessman. ‘I’m a big believer in natural ability,’ Trump said. His son, Donald Trump Jr., shares his father’s conviction. He said he was a firm believer in the concept of breeding, in ‘race-horse theory.’”

At work the other day my room was staffed with a few surgeons, three nurses, two anesthesiologists, an X-ray technician, and a profusionist, all of whom constituted a Star Trek-like collection of ethnicities and religions. Catholic, Filipino, Muslim, Indian, Pakistani, Jewish, Spanish. No WASPs (White Anglo-Saxon Protestants). Looking around the room, I quipped, “Trump’s worst nightmare.” Everybody laughed. Then someone, I don’t remember who, said, “We’ll all be shipped out if Trump wins,” Nobody laughed.

So, anyway, back to that political scenario I opened the column with today…

Like John Brunner’s Stand on Zanzibar (1969), in which, in the year 2010, the President is named Obomi, terrorist attacks are nothing to write home about, school violence is a snore, and Detroit is a broken, empty city…

Or like Tom Clancy’s Debt of Honor (1994), in which terrorists fly a jet into the U.S. Capitol. Talk about timing, and R.I.P., brave men and women of United 93.