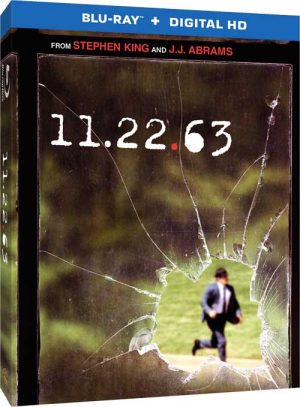 Based on the reviews, I knew I wanted to read 11.22.63 but its sheer size was, for some reason daunting. I figured maybe I’d just listen to it as an audiobook but those 30 hours sit waiting for me. Then, Hulu did me the favor of condensing it down to an eight-hour miniseries, which they released on DVD last week. I still will listen to the original, but this will do for now.

The idea of being able to go back in time and alter a key historic moment is always ripe for a good yarn. Heck, my Crazy 8 Press compatriots and I just did a book of alternate histories with Altered States of the Union. One of those moments that has tempted storytellers from Gene Roddenberry to King has been the untimely death of President John F. Kennedy.

Here, the master of the macabre sends an unprepared guy, Jake Epping (James Franco), back to Oct. 21, 1960 (Sept. 9,1958 in the book) and slowly, he realizes he’s the right guy to make a major difference. The local diner run by his friend Al (Chris Cooper) has a secret: there’s a door leading to the past. Sort of like SF Realism as opposed to Magical Realism. Anyway, Al’s been through the door and has been meticulously been figuring out how to stop Lee Harvey Oswald (Daniel Webber) from firing on the presidential motorcade. The problem is that Al is dying from cancer so convinces Jake to finish the plan.

Events conspire to turn the actual deed over to Jake and the miniseries follows his efforts. Complicating his altruistic missions is that time itself doesn’t want to be changed. That’s an interesting obstacle to be overcome.

A more mundane problem is that Jake needs cash to operate with and uses his future knowledge to lay down bets and win via gambling. A tried and true notion but belabored here and eventually, we find this English teacher isn’t as much the Everyman we’re initially led to believe he is. In some ways, Franco is the wrong guy for the part despite his appeal and acting chops.

Other problems include his falling for Sadie (Sarah Gadon), who teaches at the school he will one day be working at. Jake befriends Bill (George McKay), but how much should he know about the future? And there’s the CIA, of course. We toy with the question whether or not Oswald worked alone and the role his mother and wife played in his choices.

The middle chapters meander but the final two make up for it, nicely ratcheting up the tension until the climax and conclusion (not spoiled here). Writer Bridget Carpenter (who tossed in some lovely King Easter eggs) and director Kevin Macdonald do an overall nice job and Hulu gets credit for tackling this as one of the earliest original productions.

The eight-part production, overseen by J.J. Abrams and the Bad Robot team, looks authentic and the overall package is just swell. The DVD transfer is crisp, both looking and sounding strong. The Blu-ray edition contains the exclusive 15 minute featurette “When the Future Fights Back” with the crew talking about the book and mounting the adaptation.