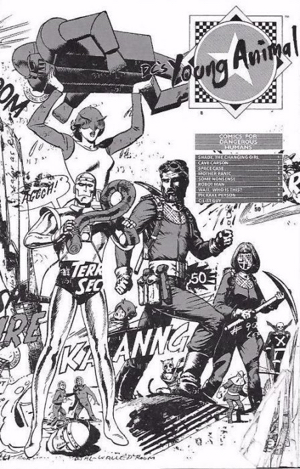 Last week, DC Comics released a free preview of its new Gerard Way-curated imprint, Young Animal, with the tagline “Comics For Dangerous Humans.” Outside of the credits listed on the inside front cover and a couple appearances of the new DC logo, it’s made to look very different from what DC puts out. This sixteen-page preview is digest sized, in black and white, and has no ads for anything other than Young Animal titles.

The wraparound cover feels is a silver age throwback. Older iterations of the Doom Patrol are prevalent, as are Cave Carson and Shade The Changing Girl. This reminded me how both Doom Patrol and Cave Carson were co-created by Bruno Premiani. Hopefully they’ll showcase this in the credits of the comics. Bruno Premiani is an underrated artist in the grand scheme of things and more people read comics today should know who he is.

DC has been doing a good job as of late crediting creators in their comics so it’s very possible we’ll see that. Shade The Changing Girl is based off of the original male counterpart created by Steve Ditko, adding to the decades long tradition in comics of rebranding Steve Ditko creations for more profit than Steve Ditko made.

Once you open this preview zine, the interior cover has a letter from Gerard Way. In it he discusses not only the contents of the preview zine but how different Young Animal is for him than his previous comics outings. He inspires confidence in the reader, as well as the importance of collaboration and how everyone working on a Young Animal comic believes in the power of these characters and the power of the stories they’re telling with them. For me, this letter did exactly what it was intended to do: inspire confidence in the reader and make me more excited to read these comics than I was beforehand. 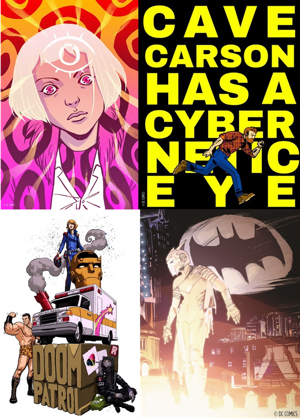 After Gerard’s letter we get a character profile of the lead from each of the four Young Animal comics. This includes Shade The Changing Girl, Cave Carson, Space Case from Doom Patrol (presumably the lead), and Mother Panic. Like in the old DC Who’s Who (edited by ComicMix’s own Robert Greenberger), these profiles are full of information that helps flesh out the characters and make us care about them before the first Young Animal comic hits the shelves. Good call on Gerard Way’s part.

The rest of this preview is filled with black and white, unlettered pages from the four different titles. The art for these titles does look top notch.

It all ends with a page showcasing the creative teams on the titles. Sixteen people in total. I had mixed feelings here.

On the one hand we have seven out of sixteen creators being women and that’s great. One of which, Tamra Bonvillain who I previously mentioned is also working on Alters for AfterShock, is trans. I don’t know how much queer representation we have on the creative teams beyond her, but it’s something. It’s especially promising that she is on Doom Patrol, a series that has dealt with queerness to some extent with Grant Morrison and even more so with Rachel Pollack, but not so much since then.

To have just shy of half the creators being women and having three of the of the four titles focus on women is important. We also get to see more of Todd Klein’s lettering and who would ever say no to that?

On the other hand, there was something missing: people of color. Seeing the creative team being all white or at very least all white with a couple or so white-passing (I don’t have DNA samples or their ancestry.com logins) made it stand out even more to me that the characters in all the books are white or white presenting. Yes, Shade The Changing Girl is an alien, but she looks white. 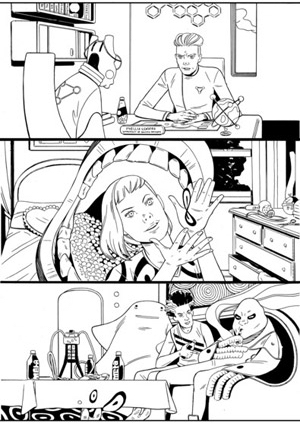 In all my online poking around, the only character of color I could see in preview images was Joshua from Grant Morrison’s time on Doom Patrol. Rebis might count technically, but was either referred to as Larry, the original cis white male host of Negative Man, or Rebis. The character’s blackness was completely erased save for one scene early on.

This is not anything that I feel is malicious or even intentional. Clearly Young Animal is trying to tell interesting stories and attract new readers or bring back old readers who enjoyed the early comics at Vertigo. They want to appeal to women as well. However, not all women are white.

That sounds harsh, but there isn’t really another way I can put it. I think Gerard Way is doing something great with what we know so far of Young Animal. I enjoyed Umbrella Academy. Each one of these titles look interesting to me and I will be giving them all a shot. I even plan on buying extra copies of Doom Patrol #1 to give to people to get them into it too. And every single interview I’ve seen or statement I’ve read from Gerard Way fills me with confidence in this project at a time where I’m not easily made to feel confident about a mainstream comics endeavor.

I’m excited to get in on Young Animal at the ground floor and I hope many others out there are as well.

Of course I always like seeing more queer representation too. Especially for titles like Doom Patrol. I heard a rumor that Rachel Pollack still has more Doom Patrol stories to tell and that this time she’ll get the recognition she deserves.