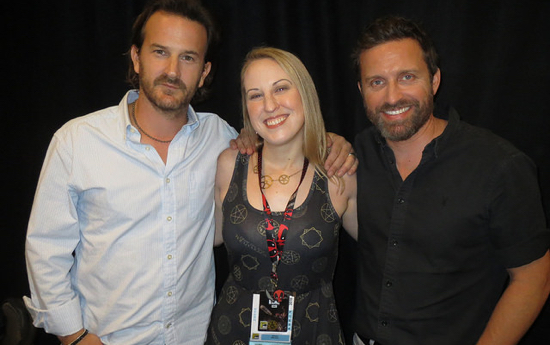 I love when things get meta in a clever way. Like, remember that episode of Supernatural where the brothers found their life story being sold in the bargain bin of a comic book store, via novels with hilariously old-school dramatic covers? And the store owner thought they were LARPing as themselves? And then they tracked down the author, and he turned out to be a prophet of the Lord named Chuck? But he didn’t believe he was, and thought he was hallucinating Sam and Dean, or had somehow written them into existence and into meeting him? And then later we found out he actually was God, who they’d been seeking unsuccessfully since meeting Chuck, and he totally knew more than he was letting on at first? Good times!

Or remember how the brothers tried to figure out why all these weird events based on urban legends that they knew weren’t “real” in their world were happening in a small town? And it turned out it was Loki basically being a dick? And then later he trapped them in a TV world that they had to act their way out of? And then it turned out he was really the angel Gabriel? Man, I love that kind of stuff – even if it does make your head spin after a while!

So what could be better than the actors who played Chuck/God (Rob Benedict) and Loki/Gabriel (Richard Speight, Jr.) starring in a new show that is totally meta – namely, Kings of Con.

Kings of Con is, as explained by the two geniuses/crazy dudes who dreamed it up, a comedic TV show based on the real experiences they’ve had while being “super famous… thirteen weekends a year” at real-life Supernatural fan conventions. Unlike that time on Supernatural where Chuck went to a Supernatural fan convention and there was a fake ghost hunt but then a real ghost showed up and Sam and Dean had to hunt it down with two guys cosplaying Sam and Dean. Although that was pretty awesome. But of course, it doesn’t stop there – because the versions of themselves they play on Kings of Con are exaggerated fictional versions: “Rich, a thrice divorced former actor who’s love of the game is fueled by the faux fame he experiences at the hands of a gaggle fans who still think he matters, and Rob, a recent divorcee back on the circuit to cover the costs of his failed marriage and stalled career.” And on top of that, the show they’re making about going to Supernatural cons was funded by Supernatural fans, some of whom undoubtedly go to the cons, as well. Whew!

So what we have here is a couple of actors on a TV show who go to fan conventions for that show (at which they’ve carved out a unique niche for themselves and become progressively more known by e.g. creating and hosting a karaoke party, MCing events, and performing at rock concerts), who then raised money via the fans of that show to do a new TV show based on going to cons for the original show. But on this new show, they will be acting as well, so it’s fiction too – which means that someday down the line, maybe there could be a third show, and

Anyway, these two dudes are incredibly nice, funny, warm people, and Kings of Con sounds like it’s going to be hilarious, ridiculous, fantastic meta fun. From the stories they were telling me in the interview I did with them at SDCC 2016, and the first trailer, I can tell that I’m going to have to watch Kings of Con, and that probably everybody else who likes good things should too.

And although Kings of Con isn’t out yet, right this minute you can watch the interview I did with Rob Benedict and Richard Speight, Jr., the Kings of Con themselves, right here.

Like what you saw? Be sure to check out Kings of Con, which is being produced by Lionsgate and SDCC, at Comic-Con HQ, when it airs in the fall.

And until next time, check out my continually growing collection of Comic-Con pics, stay tuned for even more SDCC recaps, and Servo Lectio!